1726 was the total number of home runs hit by these three gentlemen at the end of the day this paper came out. 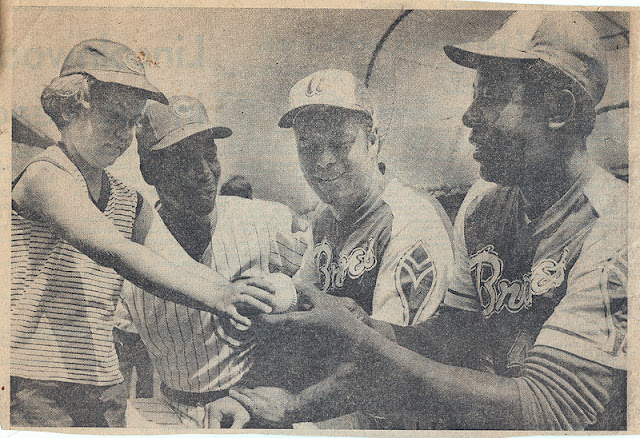 I believe it's from August 16, 1973.  The Braves were in town for a three game set.  On the left is Cubs coach Ernie Banks, middle is Braves skipper Eddie Mathews and holding the ball is Hammerin' Hank.  Banks and Mathhews will always be linked by the the number of home runs each hit in their Hall of Fame careers, 512.  On this day Hank would belt #702 off Jack Aker.  It came in the top of the 8th inning as part of a 9 run outburst that made a winner out of Joe Niekro who had entered the game in the 7th with the Braves trailing 2-0.  Coincidentally, Joe's brother Phil was the 15-1 winner the previous day pitching a complete game.  The Braves swept the series outscoring the Cubs 31-5.  Both teams would finish the season in 5th place with almost identical records.
This was on the back of the photo. 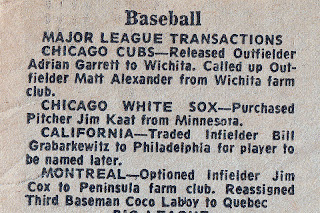 Kaat would finish the year 4-1 for the Sox and would follow that up with consecutive 20 game win seasons in 1974 and 1975.  Coco Laboy's brief career was over but we still remember him.
PS I'd like to think that kid still has the ball.  Not  a bad trio of signatures.
Posted by Hackenbush at 6:00 PM