I hope you all are having a wonderful Christmas Day.  I've already received some cards and also given some.  We got a pretty much unxpected white Christmas where I live, though I would have been fine with a brown one.
Below is my most treasured card.  Below that is a repost of a great story about Ron "Santo Claus" at Christmas back in 2009.  Coincidentally there is a Star Wars reference in it.


"Happy, happy Christmas, that can win us back to the delusions of our childhood days, recall to the old man the pleasures of his youth, and transport the traveler back to his own fireside and quiet home!
-----Charles Dickens

The main reason Santa is so jolly is that he knows where all the bad girls live.
-----George Carlin 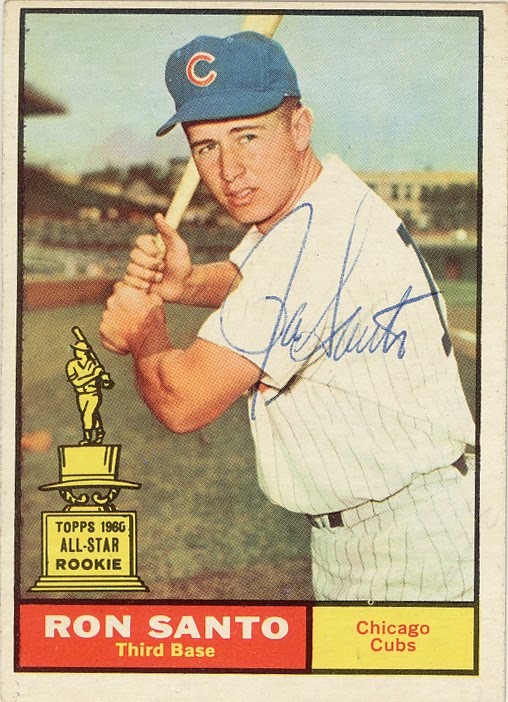 This was on the Cubs web page.


'Santo' Claus has gift for giving

By Carrie Muskat / MLB.com
12/24/09 10:00 AM EST
CHICAGO -- Ron Santo still remembers a Christmas photo of him at 3 years old holding a brand new baseball glove.
"We only got one present a year," said Santo, the Cubs' radio analyst, who turns 70 in February. "We couldn't afford any more."
This holiday season, Santo becomes Santa Claus for his two grandsons, Sam, 10, and Spencer, 4. And young Spencer had a special request: He wants some baseball gear, just like grandpa. Under the tree on Christmas Eve, young Spencer will get his wish, all kid-sized.
Spencer also is a huge fan of "Star Wars." That's a galaxy Santo isn't too up-to-date on, but he said he was able to find something Luke Skywalker would be proud of.
"This Santa Claus takes very good care of my family," Santo said.
It will be a special holiday for Santo, who recently signed a three-year contract extension with WGN Radio to do the color commentary on the Cubs broadcasts with partner Pat Hughes. The negotiations didn't take long at all.
"I love what I do, and it keeps me alive, as far as I'm concerned," Santo said from his Arizona home. "When I go in [to negotiate], I could say I'm looking for a two-year [deal] and they'll say, 'Why don't you take a three-year contract?'"
He has taken time off in years past for health reasons. Santo has had both legs amputated below the knee because of diabetes, and there are times when road trips wear him out.
"There are certain perks [WGN Radio] gives me," Santo said. "They also know I go crazy when I can't go [with the team]. As long as I'm feeling good, meaning I know my sugars have been good and I'm feeling good, I'll go. If I start to feel like I'm not feeling that great, I'll take a road trip off."
Santo annually hosts a walk-a-thon to raise money for the Juvenile Diabetes Foundation. He was diagnosed at 18, shortly after he had signed his first pro contract. At the time, life expectancy of someone with Type 1 juvenile diabetes was 25. Santo never told the Cubs about his disease. He has beaten the odds and is a hero for his resiliency.
"I can't tell you how much it means to me," he said. "I'm very proud to be able to be an inspiration to a lot of people. I get a lot of letters, and my son opens them. When I get one from somebody who has lost a leg and is a diabetic, instead of me writing back, I call them. It means so much more to them. I've helped a lot of people who have lost limbs."
Santo often refers them to his prosthetist, Ray McKinney. The two of them have established a foundation to help people with diabetes.
Imagine the surprise when someone picks up the phone and hears Santo's recognizable voice.
"They say, 'You're kidding?' but a lot of them listen to me and know my voice," he said. "When I fly from [Arizona] to Chicago or Chicago to here, you can't believe how many people come by on the plane to say 'Hi' to me."
Santo picked Arizona for the offseason. He has had enough of Chicago winters.
"I spent all my winters in Chicago when I played," he said. "When the kids got out of college, Vicki and I decided to come to Arizona. Everybody puts up their lights down here early in December, and it's really gorgeous. There's a lot of good Christmas feeling."
Which means decorating the cactus and palm trees and not having snow to shovel. Santo and his wife, Vicki, have four children, and they get together Christmas Eve to celebrate. Before dinner, the kids can open one gift and the rest wait until after the plates are cleared.
"Every year, I get a big gift [for the grandkids]," Santo said.
Just in case Sam and Spencer are reading this, we won't reveal what "Santo Claus" has planned.
"I'm Santa Claus here," Santo said. "Well, at least one of them believes in Santa Claus. I don't talk about it, but I know [Sam] knows."
There is one present Santo would like to see under the tree with his name on it: a Cubs' World Series.
"I'm always excited for the season," he said about the Cubs. "Every year, right after Christmas, in January, I start to get the itch."
He has been sticking to an exercise program this offseason to help keep his blood sugars at a good level. He works out every other day, including riding a stationary bike for 40 minutes and doing about 50 sit-ups on a specially designed chair.
"Exercise has a lot to do with controlling your sugars," he said. "When I leave here, I'll be in the best shape I can be in."
Not bad for a 69-year-old former third baseman.
Does Santo miss Chicago's snow?
"No -- are you kidding?" he said, laughing. "It's going to be 72 [degrees] here today. We've got the Christmas tree up and lights out in the back. It's really great."
Posted by Hackenbush at 10:04 AM 2 comments:

This Card is No Dud

I came close to catching my white whale a couple of weeks ago.  This one, that I did manage to reel in, is one it's cousins.  While I failed again to pick up the Ron Santo I did get his road roommate and fellow All-Star infielder Glenn Beckert.  69 players were featured including most of the fondly remembered Cubs of the era.  Here's a nice article on the set from Sports Collectors Daily.  Capturing this card may inspire to me build a more complete Glenn Beckert collection.  Do you own any of these?  Anyone from the Chicago area remember buying any?  I don't have any memory of them.

The Milk Duds people misspelled Glenn's name, as well as three others in the set.  A quick ebay search showed at least one other instance of the same error in the 1989 Pacific Sports legends set.

I grew up in a predominantly Jewish neighborhood on the far north side of Chicago and though I'm not at all religious I do call myself culturally Jewish.  Having moved to another state a few years ago, I now live in a small town that as far as I can tell is exclusively Christian.  As a way of staying connected to my roots I've started collecting cards featuring Jewish athletes.  Here's one of my favorites, a vintage Sid Gordon from the 1948 Bowman set.  Happy Chanukah! 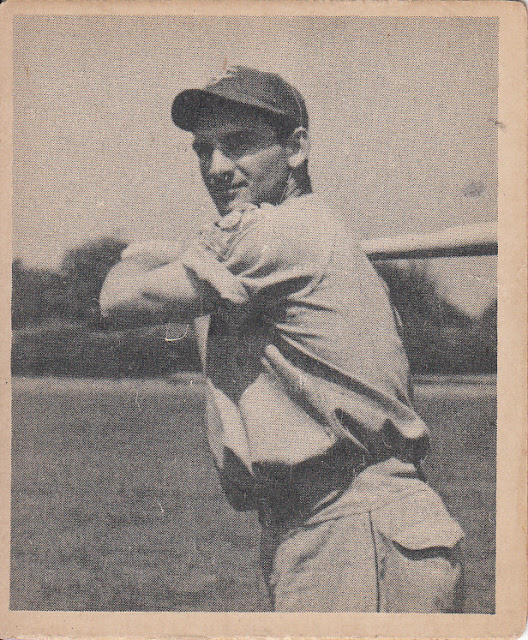 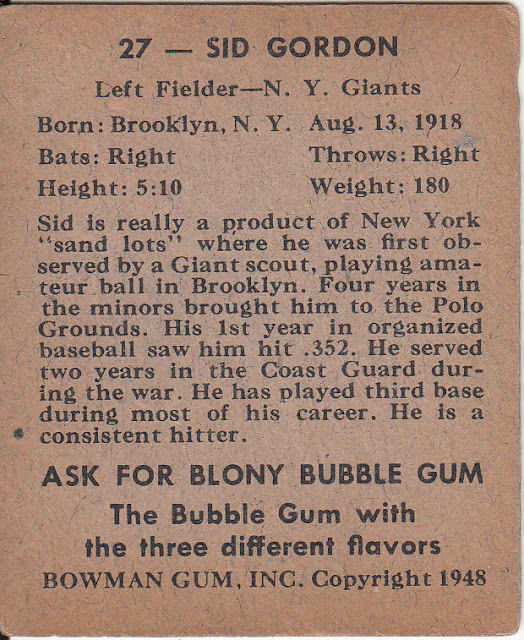 This as Adam Sandler's most recent version: