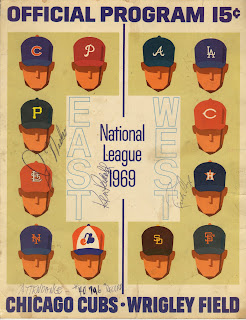 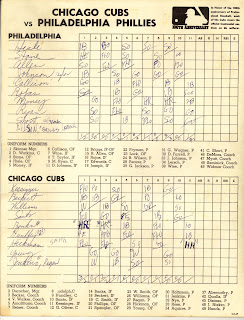 Here's the scorecard filled in by my Dad (even as an adult my handwriting was never nice as his). Cub fans remember this game for the last at bat in the 11th inning. The Cubs were trailing by a run. With one out and Randy Hundley on first, Willie Smith, pinch-hitting for Jim Hickman, homered to right center to win the game. I can't say I remember much of the previous action, including Ernie Banks' two home runs, but I do remember that moment. My Dad is gone now but looking at this scorecard brings back the memory of him jumping to his feet and hollering for joy.
Posted by Hackenbush at 9:42 AM 3 comments: