Things are not looking great for my Cubs but it's October 20th and the young Cubbie bears are still playing so it's hard to complain.  The current players may not know about the significant history between the Cubs and Mets but guys like me sure do.  I don't know that it will hurt more to lose this series to the Metsies but it would be sweet to beat them on the way to the World Series.

Two of the four Hall of Famers from the 1969 team are gone but I'm sure Fergie and Billy are pulling for their old team.


Here's an item I've had in my possesion since Billy Williams' playing days. 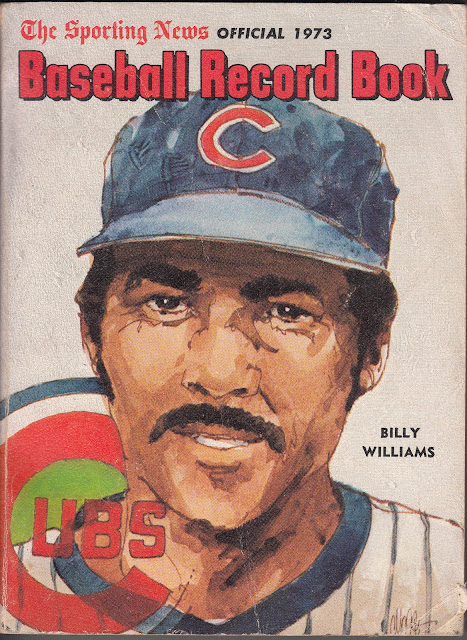 The cover art was done by Wayland Moore. 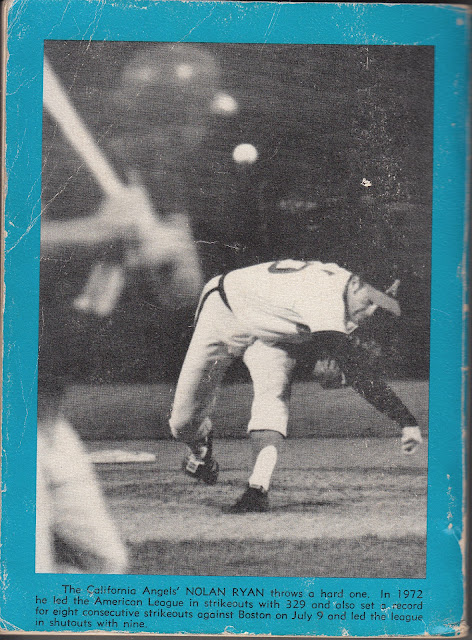 Posted by Hackenbush at 5:30 PM No comments:

We're a Couple of Oddballs

No, I'm not talking about my wife and I.  Well...  But seriously folks.  Here are a couple of cards that fit into two of my collecting goals for 2015, Jewish athletes on cards and Lou Boudreau.  I guess that's the same thing. Maybe.  More after the cards. 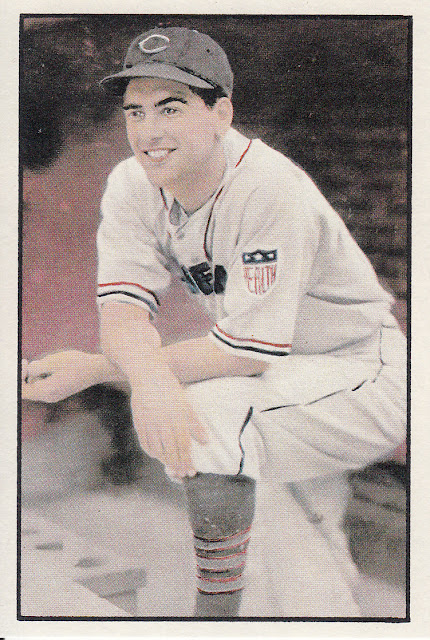 The uniform patch dates this to sometime during WWII.  Here's a link to a signed copy of the original photograph. 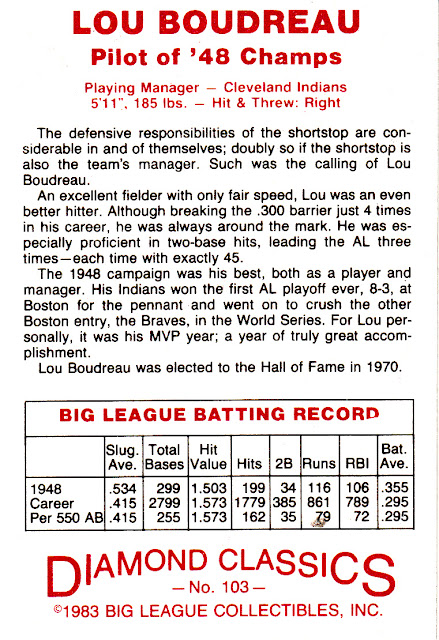 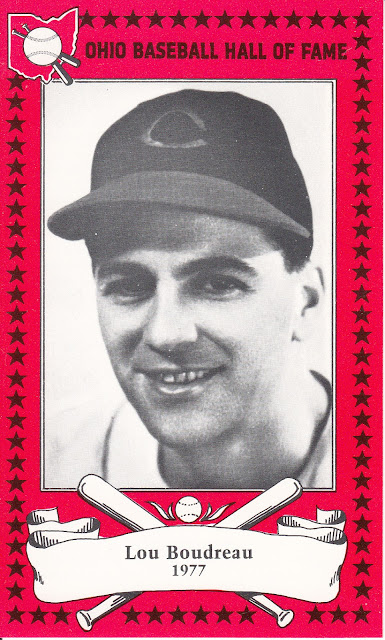 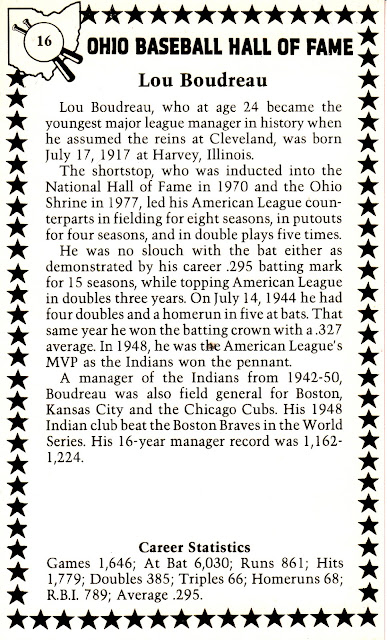 Without getting too deeply into this quagmire, Lou is technically Jewish ( and this is where I start getting uncomfortable) seeing as his mother was Jewish.  After a divorce Lou was raised as a Christian by his father.  Regardless of his upbringing/heritage, I decided to collect "The Good Kid" because I have fond memories of listening to him broadcasting Cubs games on WGN radio and sometimes TV.

Ron Santo's 2004 Topps Retired Certified Autograph Edition is easy to find.  They usually go for around $20.00.  I have these four plus one not encased and I sold another this summer.  I know there's at least a refractor version serial numbered to 25 and there could be others of even lower quantity but they're out of my price range and that's perfectly fine with me. 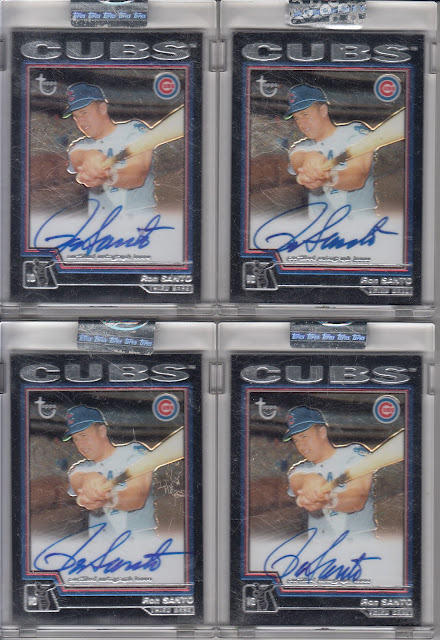 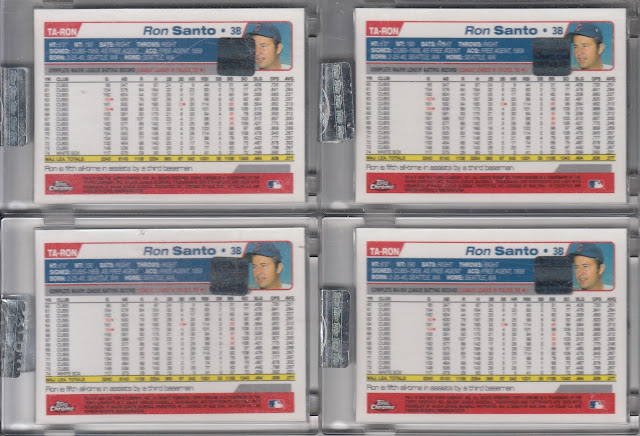 Until I saw one recently I wasn't aware of an unsigned version.  As disorganized a collector as I am I don't have a checklist of anyone's cards, even my favorite, Ron Santo.  I happened upon this one by chance while browsing Ebay.  Disorganized people need luck.  Maybe at heart I like it better this way.  At any rate I was able to snipe this one for just just $3.25.  Two other bidders didn't offer more than $3.00.  I'm not trying to acquire every variation of every Ron Santo card but when a S/N to 99 card like this comes my way for this price I'm in. 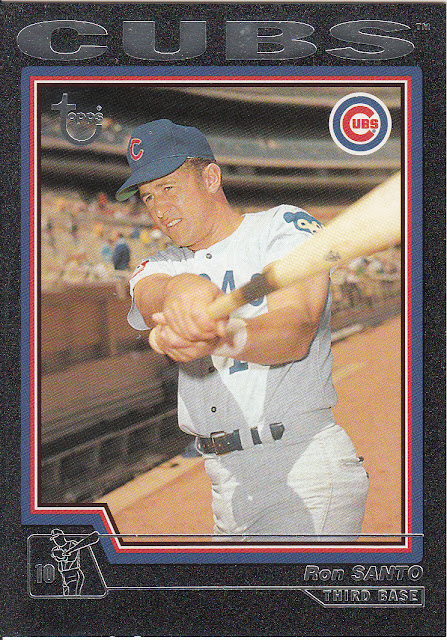 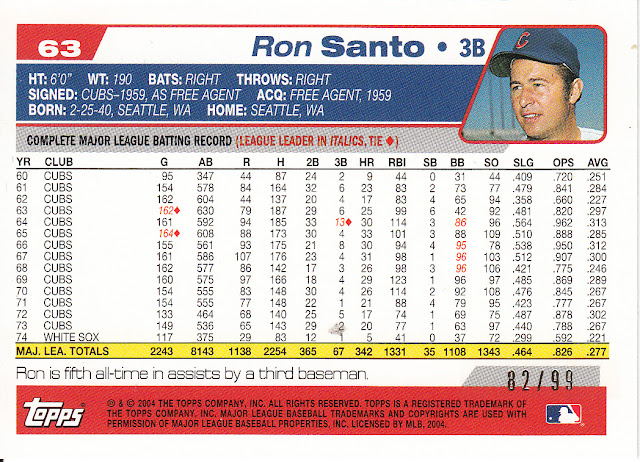