You've all seen this card by now.  The gulls told me they wanted a whole post featuring them.  So here it is. 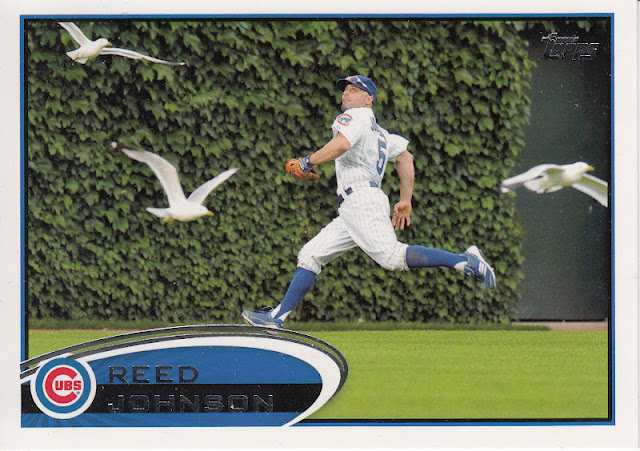 From the Chicago Tribune. June 16, 2009
Yes, Reed Johnson saw tape of the "bird game" in Cleveland last week when a flock of sea gulls took off as a game-winning hit went to center field.
Johnson seems to be in center at Wrigley Field when gulls swarm, usually very late in the afternoon, like late in the 3 p.m. start for Fox television this year. "I didn't have any balls hit to me, but I was worried about it," Johnson said. "I know you've seen them get blown up by pitches in the past, so you know they're not quick enough to react and get out of the way. That's always a concern.

"The only time it bothers me is when the ball is hit in the same area. I just hope no one hits it out there when those things decide to fly." 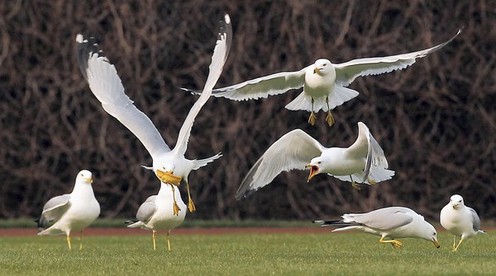 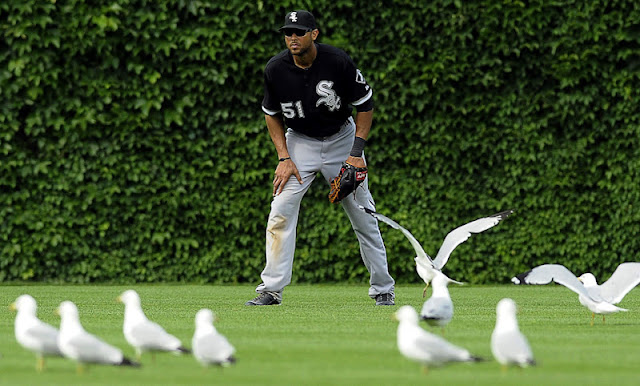 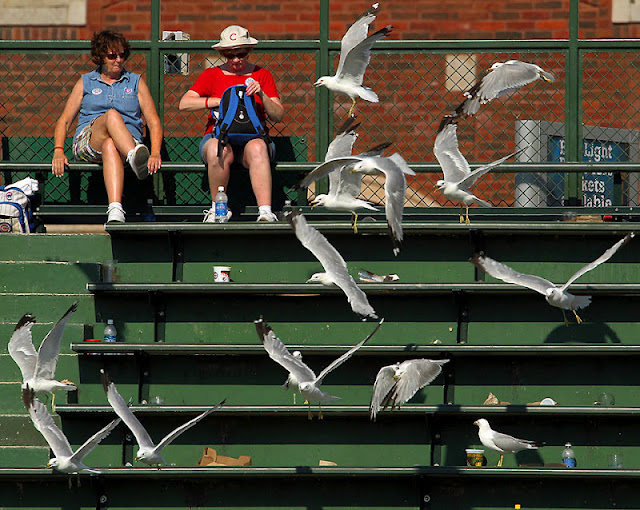 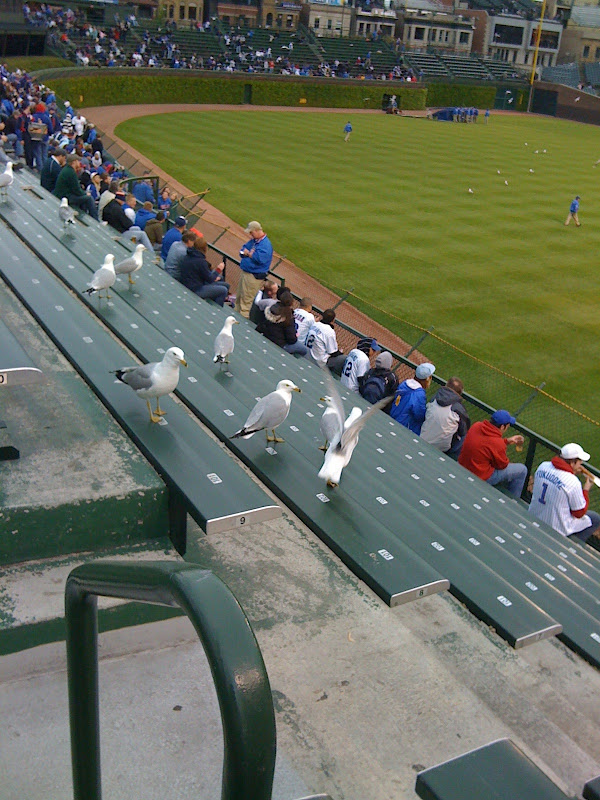 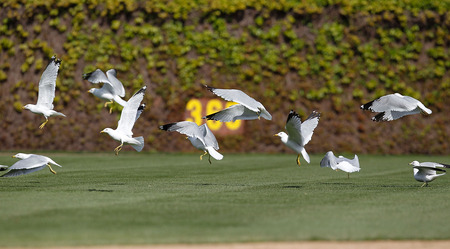 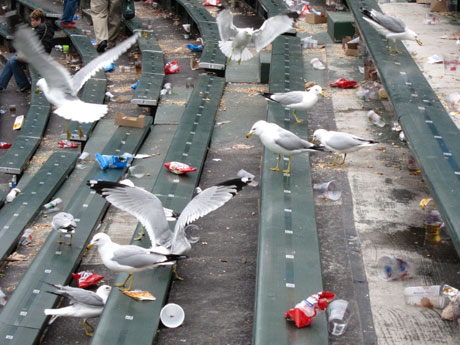 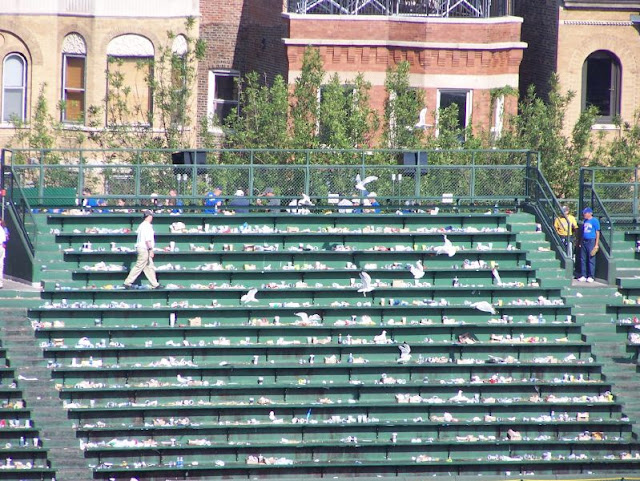 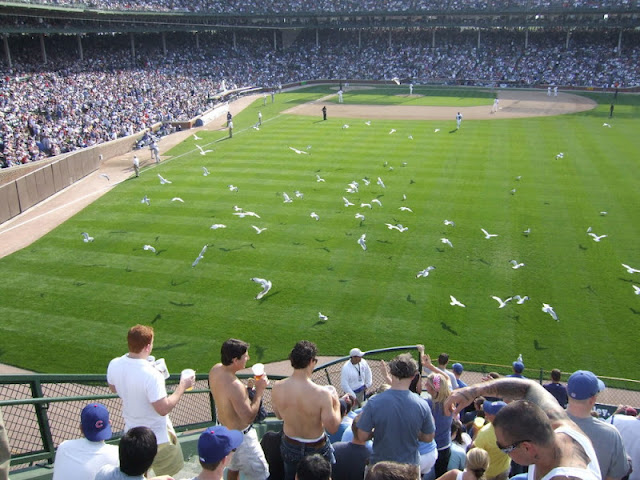 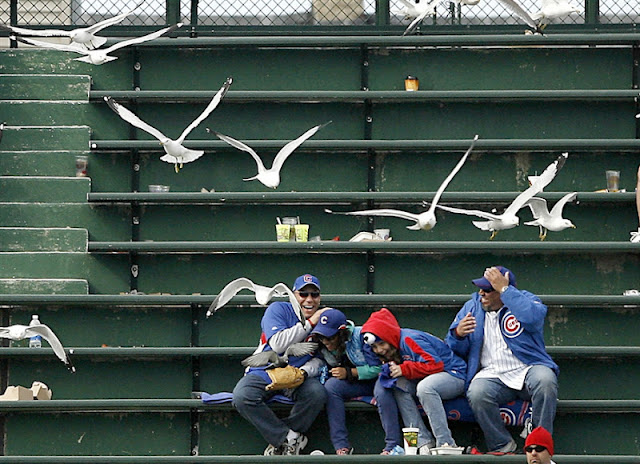 Seen a brightly colored gull lately, or one sporting flashy tags on its wings? You're not losing your mind--you've just spotted an (unwitting) participant in the Ring-billed Gull Management Program.
The program began in the spring of 2007 as a joint effort by the U.S. Department of Agriculture's Wildlife Services and the City of Chicago's Department of Environment, designed to discourage the birds from nesting here. The gulls, named for the black ring circling their yellow bill, were only occasional visitors here until the mid-1970s. However, by 1999, 134,000 of these birds had decided that Chicago-area landfills, trash cans, and beaches made a fine home.
By April 2007, the gull population had soared by 500 percent in some locations. In addition to other various nuisances attributed to the gulls, their droppings are believed to be a possible cause of elevated E. coli levelsin Lake Michigan, which have resulted in many beach closures.
The program hopes to gain insight into controlling the gulls through tagging and monitoring. Wildlife Services personnel wing-tagged more than 1,300 nesting gulls at Lake Calumet (blue and yellow tags) and at Dime Pier near Navy Pier (orange and green tags) in 2007 and 2008, along with help from biologists from the National Wildlife Research Center in Ohio. They also marked other gulls with nontoxic dyes, leaving not a few members of the public puzzling over their hue. Marking the gulls will help researchers learn more about their movements and lead to long-term management strategies. Birders from as far as Iowa, Lake Ontario, and even Florida have reported the marked gulls.
People who see marked gulls in 2008 can e-mail john.w.hartmann@aphis.usda.gov. Include the date, time, and specific location of the sighting, the color of the tag or dye, the number of marked gulls seen, and the observer's name and phone number. The study ends in December, and results will be released in early 2009.
— Betsy J. Green

Posted by Hackenbush at 4:16 PM