Blow Out the Candles July 19

Cubs great Phil Cavarretta was born in Chicago, IL on this date in 1916. 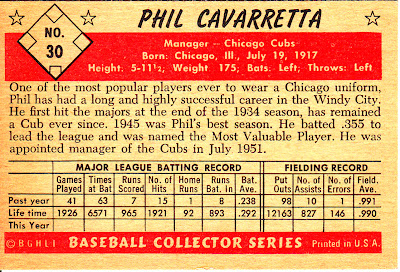 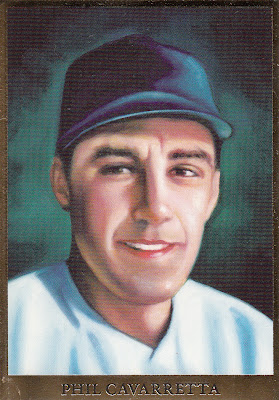 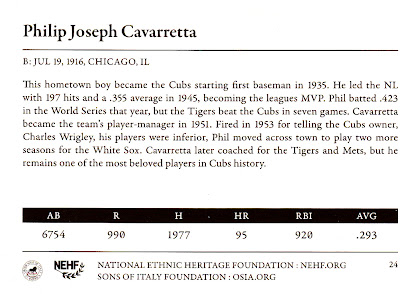 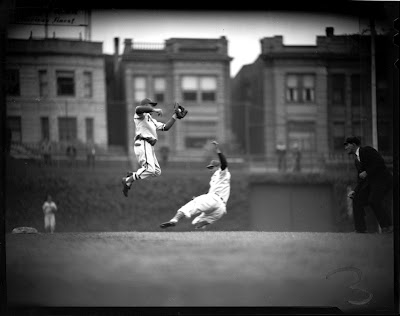 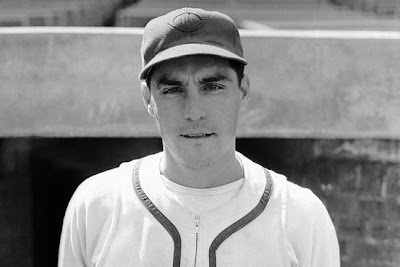 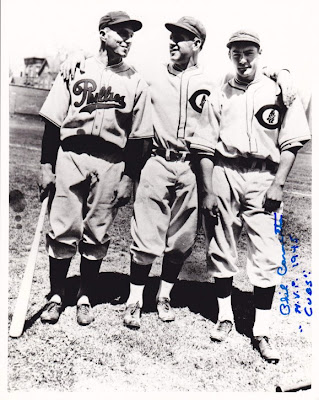 Phil Cavarretta, who played 20 seasons for the Chicago Cubs and won the National League's most valuable player award and batting championship in 1945, the last time the Cubs captured a pennant, died Saturday in Lilburn, Ga. He was 94.

His death, at a hospice, resulted from a stroke he sustained on Dec. 7, his son, Phil Jr., said.
A native of Chicago's North Side, Cavarretta was taken by his coach at Lane Tech High School for a tryout at Wrigley Field in the spring of 1934 after his team had won its fourth straight city championship. When the Cubs took batting practice, the 17-year-old Cavarretta faced pitcher Pat Malone, ''a grizzled old veteran,'' according to Cavarretta.
''I was only 135 pounds,'' Cavarretta recalled in an interview with The Chicago Sun-Times. ''He thought I was the bat boy, but I sprayed the ball around pretty good and he yelled, 'Get that little guy out of there.' ''
That wasn't about to happen. Playing first base and the outfield at Wrigley Field from 1934 to 1953, and serving as the Cubs' player-manager for two and a half seasons, Cavarretta became one of the most popular figures in the team's history.
A left-handed batter with an unremarkable 5-foot-11, 175-pound frame, Cavarretta was hardly a power hitter in the mold of the Cubs stars Hack Wilson, Ernie Banks and Sammy Sosa. He had only 95 career home runs. But he had 1,977 hits and a .293 career batting average.
He played for three Cubs pennant winners -- in 1935 and 1938 and then in baseball's last wartime season, when he beat out the Boston Braves' Tommy Holmes by a wide margin for M.V.P. honors and took the batting title with a .355 average.
Playing mostly at first base for the '45 Cubs, Cavarretta headed a lineup that included Stan Hack at third base and Andy Pafko, Bill Nicholson and Peanuts Lowrey in the outfield. The Cubs ended the St. Louis Cardinals' string of three straight pennants.
Cavarretta was an All-Star from 1944 through 1947 and tied the St. Louis Cardinals' Stan Musial for the league lead in hits in 1944 with 197, batting .321 that season. His Cubs teams never won a World Series -- they lost to the Tigers in 1935, the Yankees in 1938 and Detroit again in 1945 -- but Cavarretta was usually a star at the plate in October. He batted .462 in the 1938 World Series and .423 in the 1945 Series.
When Cubs Manager Frankie Frisch was fired in July 1951, Cavarretta replaced him as a player-manager. He had little talent in the lineup except for the slugging outfielder Hank Sauer, and the team finished in last place. Cavarretta's Cubs finished fifth in 1952 and seventh in 1953, and by spring training 1954, he decided it was time for a talk with the longtime owner Phil Wrigley.
''What I said was, we needed help at first base, at third base and in center field,'' Cavarretta remembered in an interview with The Chicago Tribune in 1992. ''Mr. Wrigley interpreted that as a defeatist complex.''
Cavarretta was promptly fired, but his pessimism proved well founded. The Cubs finished in seventh place in 1954 under Hack, his former teammate.
Even after he was fired, Cavarretta remained a fixture in Chicago. He was signed by the White Sox and played into the 1955 season on the South Side before retiring.
Philip Joseph Cavarretta, the son of Italian immigrants, was born on July 19, 1916.
After his tryout at Wrigley Field in spring 1934, he was signed to a minor league contract, then made his debut in the major leagues the next September. In 1935, he supplanted Manager Charlie Grimm at first base, and he never returned to the minors.
After he retired as a player, Cavarretta was a coach with the Detroit Tigers and the Mets.
In addition to his son, of Lilburn, Cavarretta is survived by his wife, Lorayne; his daughters Diana Salvatore of Tucson; Patti Schwarb of Salem, S.C.; Cheryl Eagleson of Ocala, Fla., and Lori Coryell of Macon, Ga.; 7 grandchildren and 10 great-grandchildren.
Cavarretta was the second major figure in Cubs history to die this month. Ron Santo, the longtime third baseman and broadcaster, died of bladder cancer complications on Dec. 2 at 70.
Even through the Cubs' lean times in the last years of his career, Cavarretta was known for his drive.
''Phil Cavarretta was the team leader,'' Cubs pitcher Johnny Klippstein, recalling the Cubs' seventh-place team in 1950, remarked in Danny Peary's ''We Played the Game'' (1994). ''He was as gung-ho about winning as a player could be. He'd want to win at all costs and he didn't care if we were behind, 10-0.''
As Cavarretta told The Sporting News in the Cubs' pennant-winning 1945 season: ''Hustling was just born in me.''
Posted by Hackenbush at 7:00 AM