Phil and Joe Together

Phil and Joe Niekro are the winningest pair of brothers in MLB history.  Together they won 539 games.

Twice in their careers the brothers Niekro were teammates. 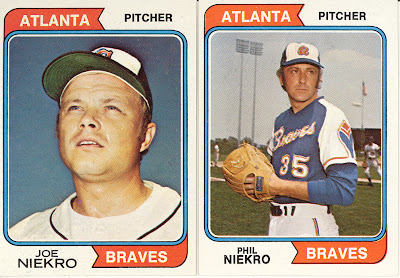 This pair of 1974 Topps cards represent the only time Joe and Phil were together for an entire season.  The Braves acquired Joe off waivers from the Tigers on August 7, 1973  and sold him to the Astros on April 6, 1975.

The two were reunited,  only briefly, in 1985 when the Yankees acquired Joe in a trade from Houston on September 15.  The cards below became a fantasy when Phil was released by the Yanks on  March 28, 1986. 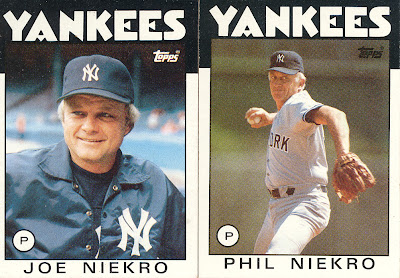 Phil, 71, is currently an advisor on a baseball line for a toy company in Georgia.  Younger brother Joe died of a brain aneurysm in 2006 at age 61.
Posted by Hackenbush at 5:20 PM