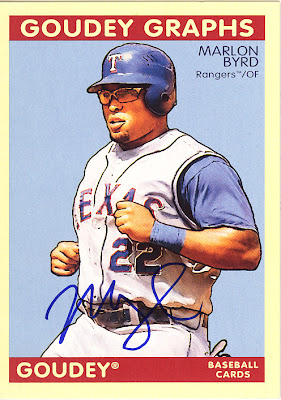 2010 marked the second year in a row that the Cubs picked up a free agent from the Texas Rangers but the outcome could not have been more different.  The 2009 season saw the addition of Milton Bradley, the clubhouse cancer that hit .257 with 12 HR and 40 RBI and was shipped off to Seattle at the end of the year.  In 2010 Marlon Byrd joined the team. He batted .293 with 12 HR and 66 RBI.  He made the All-Star team and contributed a great defensive play to the game, helping the NL win.  Most importantly Marlon has been a great teammate who played hard every day.

It's been reported in today's Chicago Tribune that after the recent scuffle between Carlon Silva and Aramis Ramirez Byrd along with new Cub Carlon Pena were the first to step up and call for a team meeting to get the players on "the same page".  That's called leadership.  Go Marlon!
Posted by Hackenbush at 5:30 PM