Card of the Day -- Names 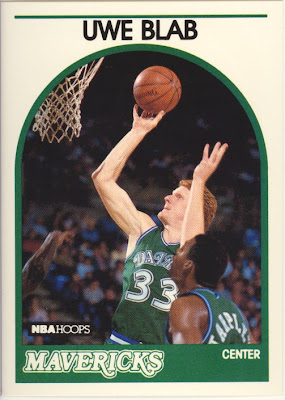 1989-90 NBA Hopps #104
From Hoopedia:
Uwe Konstantine Blab (born March 26, 1962 in Munich, West Germany) is a German former professional basketball player who had a 5-year career in the NBA.

School and CollegeBlab attended Effingham High School in Illinois, U.S., and played college basketball for the Indiana University Hoosiers, averaging 16 points per game in his senior season. He was under constant criticism under coach Bob Knight for not being in good shape.

Drafted seventeenth overall by the Dallas Mavericks in the 1985 NBA Draft, he never proved to be a significant contributor. His first four seasons were with the Mavericks, and he played for both the Golden State Warriors and the San Antonio Spurs in his final year. He finished with career averages of 2.1 points and 1.8 rebounds per game at the center position.

Blab now resides in central Texas, working as a math teacher and a substitute teacher.
Posted by Hackenbush at 3:00 PM