Blow Out the Candles Jan 3

Two Hull's have birthdays today but only one played hockey. 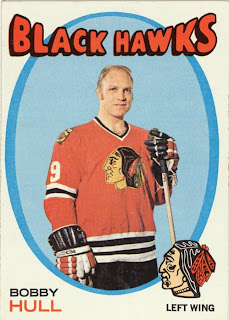 The great Bobby Hull is celebrating his 70th birthday today. Bobby's been having blast since coming back to the Blackhawks organization.

Stanley George "Frenchy" Bordagaray was born on this date in 1910.


Frenchy (lower left) as a member of the Yankees


Below is his obituary from The New York Times

Frenchy Bordagaray Is Dead; The Colorful Dodger Was 90


Frenchy Bordagaray, who staged a one-man mustache revival in the major leagues while playing for the Brooklyn Dodgers in 1936, becoming the personification of the Daffy Dodger, died April 13 at a nursing home in Ventura, Calif. He was 90.
Like most of Depression America, the Dodgers of the 1930's were down and out. The seats at Ebbets Field (usually empty) were crumbling, and the ball club was mired in the second division. Babe Herman, who ran himself into the three-men-on-a-base fiasco of the 1920's, was long gone. But the Dodgers still had their characters, most notably Manager Casey Stengel and a free-spirited outfielder-third baseman known as Frenchy.
Stanley George Bordagaray got his nickname from his mother when he was growing up in Coalinga, Calif., in a family of French descent. His father wanted the boy to be a violinist, but he preferred to play sports, starring in baseball, football and track at Fresno State University.
Bordagaray debuted in the major leagues with the Chicago White Sox in 1934 and joined the Dodgers the following season. When he arrived at spring training in Daytona Beach, Fla., in 1936, he stunned the baseball world by wearing a mustache and goatee. The mustache was grown the previous winter for a bit part in the Hollywood movie ''The Prisoner of Shark Island,'' an account of the jailing of Dr. Samuel Mudd for complicity in the assassination of Lincoln.
Mustaches had been as common as spittoons in the baseball clubhouses of the 1890's, but only a few players had worn them after the turn of the century. Wally Schang may have been the last one to grow a mustache before Bordagaray, when he caught for the 1914 Philadelphia Athletics.
''I was making $3,000 a year playing baseball, so I figured I could at least have fun while I was not getting rich,'' Bordagaray once explained. ''But after I had it about two months, Casey called me into the clubhouse and said, 'If anyone's going to be a clown on this club, it's going to be me.' ''
Bordagaray shaved, and the mustache wouldn't make a comeback until the 1970's, when Charlie Finley, the Oakland owner, slipped $300 to every Athletics player who grew one.
Bordagaray found other ways to torment Stengel. When he was picked off second base in a game with the Chicago Cubs, Stengel argued with the umpire that Bordagaray had been standing on the bag the whole time. But Bordagaray told Stengel that he had been tapping the bag and had been caught in between taps.
After the Dodgers finished seventh in 1936, Stengel was fired and Bordagaray was shipped to the St. Louis Cardinals. The would-be violinist then switched to the fiddle and washboard, playing in Pepper Martin's Mudcats band on the Fox theater circuit at $50 a show.
Bordagaray later played for the Reds and the Yankees, then returned to the Dodgers during World War II. He donned a fake beard as a member of the Battling Beavers team in the 1944 Red Skelton film ''Whistling in Brooklyn,'' filmed in part at Ebbets Field.
Antics aside, Bordagaray, a right-handed hitter, had good speed and a fine batting eye, playing 11 seasons with a career average of .283.
He is survived by his wife, Victoria, of Ventura; two sons, Stanley II of Palo Alto, Calif., and Christopher of Port Orchard, Wash.; two daughters, Stanna Lee Jones of Lindsay, Calif., and Germaine Bordagaray of Ventura; a brother, Ernie, of Bakersfield, Calif.; two sisters, Isabelle Storey of Seal Beach, Calif., and Rose Nay of Fresno, Calif.; seven grandchildren; and six great-grandchildren.
Bordagaray's baseball career ended in midsummer of 1947, when he was suspended for the rest of the season for attacking an umpire while managing the Greenville (S.C.) Spinners of the South Atlantic League. After that, he turned to buying property for conversion to cemetery use.
Bordagaray loved being the center of attention, as he no doubt was one day when his Dodgers beat the Cardinals, 4-3. ''I accounted for all seven runs,'' he recalled. ''I knocked in four myself and played a Terry Moore hit into a three-run homer.''
Photo: Frenchy Bordagaray in 1936, when his facial hair made news. Mustaches were common in the 1890's and 1970's, but not often in between. (Associated Press)

A version of this obituary; biography appeared in print on May 23, 2000, on page B11 of the New York edition.

VAN LINGLE MUNGO
Posted by Hackenbush at 8:00 AM