Most of the cards I saved from when I was a kid are still in pretty good shape. Here's one from my third year of collecting (the first two years' cards are gone) that proves I was a kid for sure. 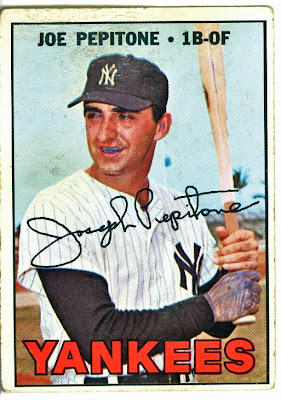 a. There's some kind of damage at the top from water or glue or maybe sweat?

b. The bat seems to have a pen mark down it's length.

c. The whites of Joe's eyes are blue as well as his teeth.

d. I must have thought he needed a batting glove because he has one now. 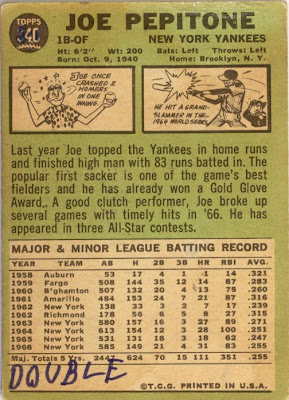 e. Not sure what the point was but the card number is somewhat obscured by ink.

f. At the bottom left the word DOUBLE is printed. This is obviously evidence that a makeshift game was made out of a number of these cards.

BTW I don't think this had anything to do with Yankee hating. Firstly, I was pretty young for that. Secondly, my dad was a Cubs hence National League fan.
Posted by Hackenbush at 10:35 AM