Card of the Day 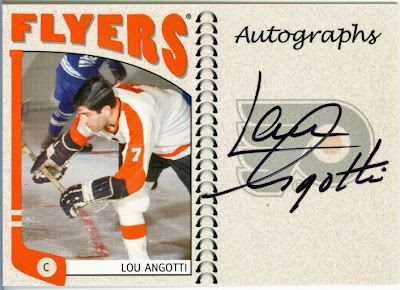 I love it when a card is given a nice background for a signature. That and that these are all ON CARD autos.

Lou Angotti was the Flyers first captain after having been claimed from the Blackhawks in the 1967 expansion draft. He returned to the Hawks a couple of years later and was on two Stanley Cup finals teams in four years before finishing his NHL playing career with the St. Louis Blues.
Posted by Hackenbush at 2:07 PM