Blow Out the Candles Nov 6 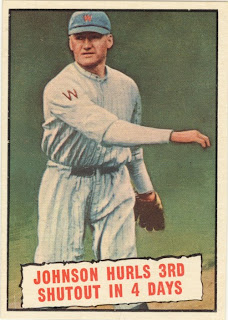 
One of the greatest pitchers of all time, Walter Perry Johnson, was born on this date in 1887 on a farm near Humboldt, Kansas. If you aren't familiar check out his numbers. He was second in win all-time with417, 110 of them shutouts.

"The beanball is one of the meanest things on Earth and no decent fellow would use it. The beanball is a potential murderer. If I were a batter and thought the pitcher really tried to bean me, I'd be inclined to wait for him outside the park with a baseball bat." --- Walter Johnson

"His fastball looked about the size of a watermelon seed and it hissed at you as it passed." - Ty Cobb

"The March King", composer/conductor, John Philip Sousa was born on this date in 1854. Sousa composed 136 marches including Stars and Stripes Forever.


Nichols won a Grammy in 1961 for his comedy album with Elaine May.

Nichols won a Best Director Oscar for The Graduate.


Actress Sally Field is celebrating her 63rd birthday today. Ms. Field has two Oscars to her credit, for Norma Rae and Places in the Heart. On TV she was known for her role as Sister Bertrille in The Flying Nun and in her first role as Gidget Lawrence in Gidget. Since nuns usually don't wear bikini's I assume the picture above is from Gidget.