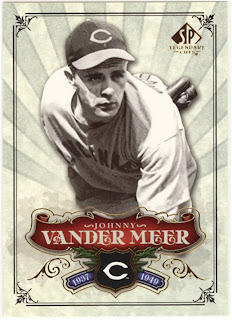 
Johnny Vander Meer, pitcher for the Cincinnati Reds was born on this date in 1914. The 4 time All-Star lefty is best known as the only pitcher in Major League history to pitch back to back no-hitters. The first came on June 11, 1938 at Crosley Field in Cincinnati against the Boston Braves. Four days later he no-hit the Brooklyn Dodgers in the first ever night game at Ebbets Field. Leo Durocher made the final out for Brooklyn.

Aussie tennis great, Ken Rosewall turns 75 today. One of the greatest players of the 1950's Rosewall was still winning championships in the '70's. Though he never won Wimbledon (he was a finalist 4 times) he did win eight Grand Slam titles.