One thing I've learned from reading card blogs is that if you look closely every card has something about it you can appreciate. With that in mind I give you this 1997 Fleer Mike Stanton, #590. 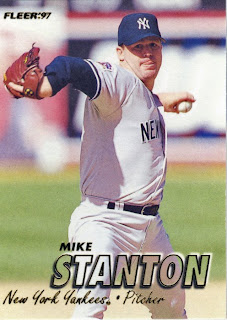 He's already Mike but Mr. Stanton seems to want to "be like Mike" with tongue sticking out as he delivers the pitch.
In the years following this card's arrival Mike would go on to make the AL All-Star team in 2001 and appear in 4 World Series for the Yankees. All in all he was part of 6 World Series teams, 3 of them winners. His World Series stats are impressive, 3-0, 1 save, a 1.54 ERA with 20 K's and just 5 BB's. 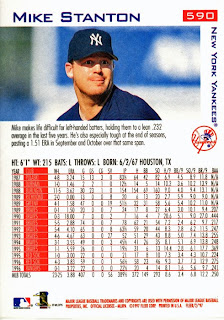 Apparently the tongue thing was habit as he's doing it again on the back of the card with a different jersey.
Mike is 2nd all time in appearances for a pitcher, with 1178, trailing only Jesse Orosco's 1252. His spot seems pretty safe. Trevor Hoffman is the closest active player with 972.

I kinda like the design of the 1997 Fleers. You get a full edge to edge image on the front, a different head shot on the back, a bit of bio/commentary, and a pretty extensive set of stats.

Posted by Hackenbush at 1:19 PM