You just don't hear of many men named Fran these days. Maybe you never did. There wasn't a Fran Sinatra or Frannie Valli, no Fran Lloyd Wright nor Fran Zappa. There's Fran Drescher...but that's another story.

There are only two athletes I can think of with the name Fran. One is in the Hall of Fame, the other had a better career as a broadcaster than a ballplayer. 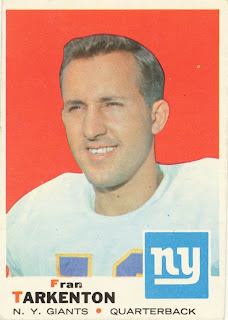 Fran never won a Super Bowl but when he retired after the 1978 season he held NFL career records in pass attempts, completions, yardage, and touchdowns; rushing yards by a quarterback; and wins by a starting quarterback. He was elected to the Pro Football Hall of Fame in 1986.

I remember Fran Tarkenton as a Minnesota Viking torturing the Bears with last minute drives. I don't know how many times this really happened but in memory it seems like dozens.

There once was a Viking named Fran,
Who took up the football and ran.
He eluded the linemen and linebackers too
Until to his man in the end zone he threw
And dashed hopes of every Bears fan.

The other Fran that comes to mind is former catcher and current New York broadcaster Fran Healy. 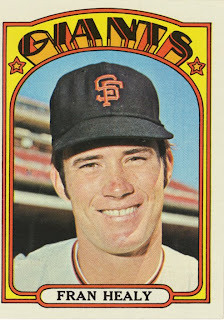 Fran played for nine seasons from 1969 to 1978. He accumulated about one third of his 332 hits in 1974 when he hit .252 (just about his lifetime average) for the KC Royals. It was the only year in which he appeared in more than 100 games. Since his playing days he has been a broadcaster with both the Mets and Yankees. I'm sure those of you in the NY area are very familiar with his work. Not so much here in Chicago.

Fran may not be the most manly name but it's better than Sue:

Posted by Hackenbush at 6:45 PM