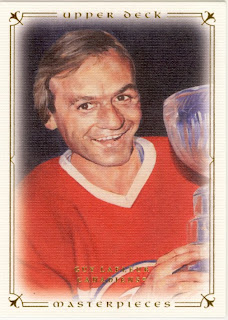 Today is Montreal Canadiens great, Guy Lafleur's 58th birthday. In the storied history of the Canadiens Guy ranks #8 in games played, 1st in points and assists, 2nd in goals scored, and 1st in game winning goals, among other records. Known as "The Flower" amongst English speaking fans he was known by French speaking fans as "le Demon Blond" (the blond demon). Guy won 5 Stanley Cups with Montreal. He was inducted into the Hockey Hall of Fame in 1988. In 1979, Lafleur released an album called 'Lafleur'. The album consisted of Guy reciting hockey instructions and singing, accompanied by disco music. I'm going to show you the album. If you want to subject yourself to the "music" feel free to Google it.

Posted by Hackenbush at 9:33 AM