The Bears won on Sunday (a miracle?) so I decided to post some vintage football cards. The first thing I found was this: 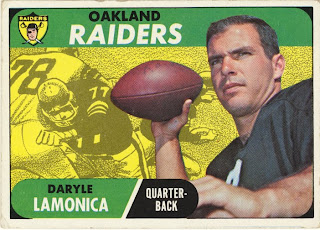 I wasn't sure of the year, 67, 68, 69? I know my baseball but I'm weak on the sixties FB. I did like the look of the card so I pulled all the others I had. This was what I found: One each of Billy Cannon, Tom Keating, Herb Addlerley, Jim Grabowski, 2 each of Fred Biletnikoff and George Blanda, and 5 of Daryle Lamonica. How strange I thought, I only have 13 cards from this year and 11 are Raiders, 2 Packers? Did I lose all the rest? Of course, if you know your football cards you know where I went wrong. A little research told me that the two Superbowl teams from the previous January were given specially designed horizontal cards. It all fell into place after that. 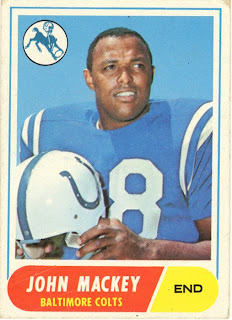 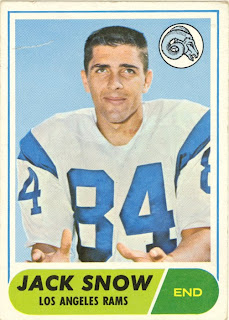 Here's a few more of the Raiders/Packers cards.. By the way the Packers won Superbowl II 33-17. It was the Pack's second straight championship and Bart Starr was repeat MVP. The Packers legendary coach Vince Lombardi retired after this, his final game. 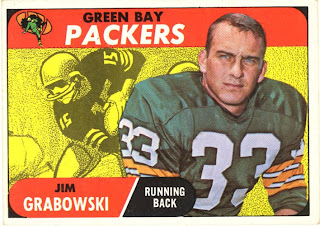 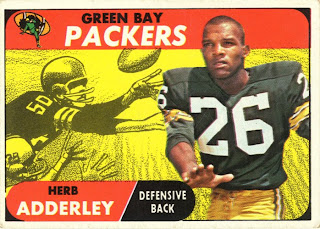 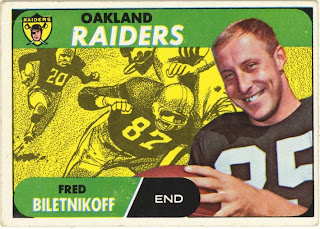 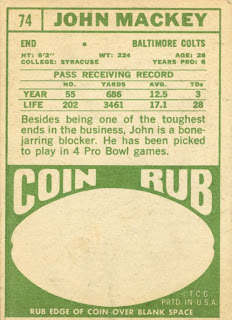 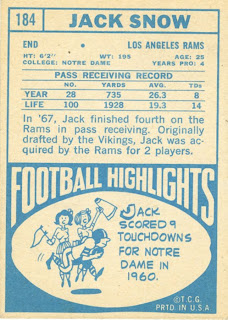 As you can see in the examples above some cards were interactive. You had to rub over the space at the bottom with a coin to reveal the cartoon.

20 of the cards had images on the back that when assembled made up pictures of either Bart Starr or Len Dawson. The back of Fred Biletnikoff's card is one of them: 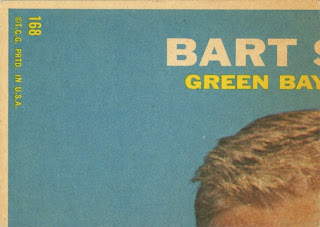 The annoying thing is that for every card like this you lose all the information you would normally get for the player on the front. In this case it is adding insult to injury as Fast Freddie's bio is obliterated by the man who beat his team in the Superbowl.

As I said at the start, I like the horizontal design used with the Packers/Raiders. I think the whole set would have been better this way.

Check out an example of the same year's hockey set: 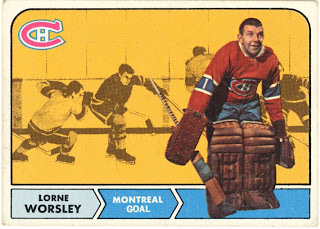 It's very similar in design to the special football design but it was used for the entire set.

Extra credit just for fun---Would anyone like to finish the following limerick?--
"There once was a man named Lamonica...

Posted by Hackenbush at 8:35 AM