Yesterday's post was about the Cub's Roe Skidmore who has a lifetime batting average of 1.000.  There aren't a lot of pictures out there of Roe but I did find one from the Chicago Tribune's archives. 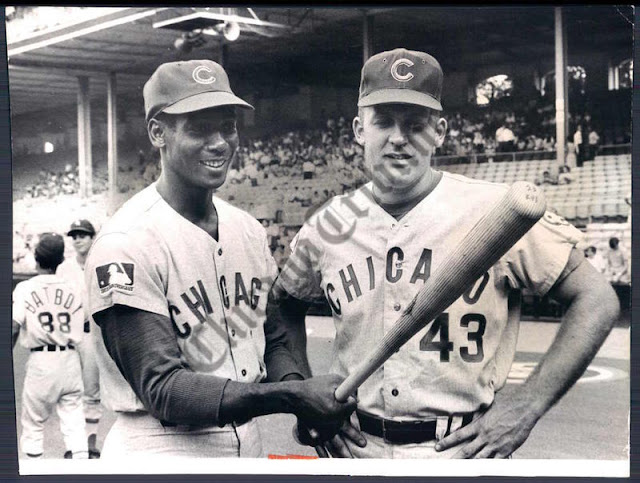 I was mystified by this photo at first.  Take a look.  First of all Ernie and Roe are wearing road uniforms.  The patch on Ernie's right sleeve indicates it's from 1969.  According to multiple sources, in 1969 jersey #43 was worn by Johnny Hairston.  Johnny is the uncle of Jerry Jr. and Scott Hairston.  The guy next to Ernie is not Johnny Hairston.  They're standing in an old ballpark.  Ok, let's move on. 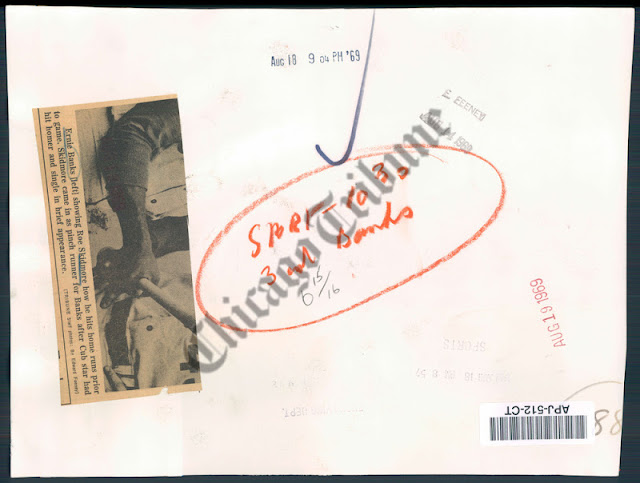 "Five of us got called up at the end of the '69 season," Skidmore fondly remembered, ticking off the names as easily as if we were discussing '99. "Joe Decker, Jim Colborn, Jim Dunegan, Adrian Garrett and myself.
"Then mainly we just sat there and waited. Leo wouldn't play us. He didn't deviate from his regular lineup."
To get to the Show, dress, feel like a genuine major-leaguer, then not play is baseball's mixed blessing. You're in but you're out. You sit, tap your bat, pop your bubble-gum bubbles, watch the game, watch your manager. Durocher sat cross-armed, avoiding eye contact.
The Mets got the pennant; Skidmore got a return ticket to the minors. His future was uncertain. After all, the Cubs had a first baseman: Ernie Banks. You might have heard of him.

Well first and most obviously if the dates on the back of the photo are right it isn't the end of the season.  Next there seems to be confusion about the year Roe is speaking of.  Decker and Colborn were called up at the end of the '69 season but it's unclear that he and Jim Dunegan were.  Furthermore, Adrian Garrett didn't sign with the Cubs until December 8, 1969.  Maybe Roe was remembering 1970, not 1969.  The article goes on from there to Roe's one at-bat in 1970.  Next. 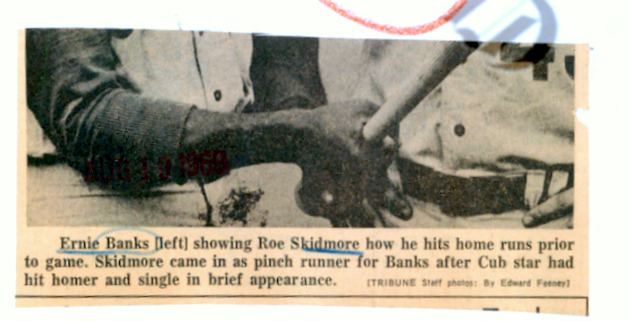 Here's the caption that appeared under the photo when it was printed in the paper.
Now we're getting someplace.  Some real statistics.  Banks hit a home run and a single on this day and Roe came in to pinch run for him.  A check of Ernie's game logs for both 1969 and 1970 nets no such scenario, in August or any other month.

Let's go back to the photo itself:

My wife helped me here (she's very visually oriented).  Again, it's an older ballpark.  Could it be Comiskey Park? 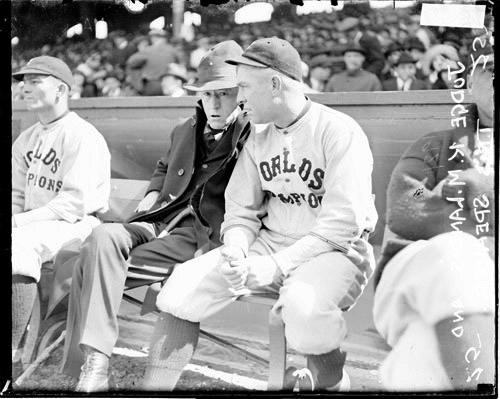 Here's Tris Speaker and Judge Landis at Comisky.  Yep, those windows are the same.

Was this an exhibition game between the Cubs and Sox in the middle of a pennant race?  That has to be it.
From the St.Petersburg Times, August 6, 1969: 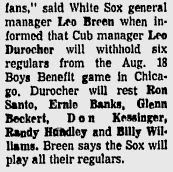 So in the middle of the summer of 1969 the tiring Cubs got back from an 11 game west coast road trip and after having played a double header the day before in San Francisco they played a charity exhibition game against the White Sox.  Apparently Durocher compromised on not playing all his starters.  By the way, coming off the road trip the Cubs had won 11 of 15 games.  After this exhibition game, they would go 4-7 at Wrigley. 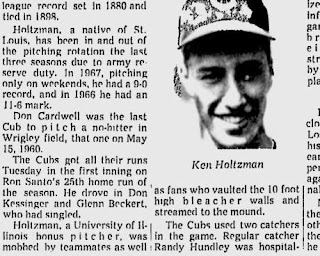 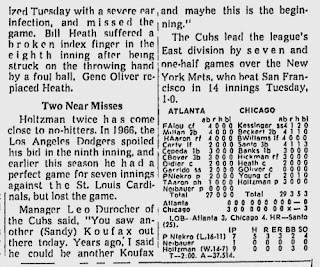 Posted by Hackenbush at 9:00 PM