Pitcher Lil Stoner was born in Bowie, Texas on this date in 1899.

Another nickname, the "Bowie Baker" came as a result of a job he took as a sixteen year old at a Fort Worth bakery. 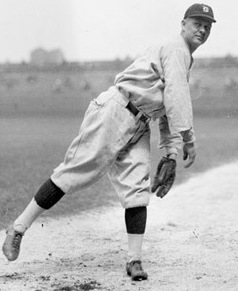 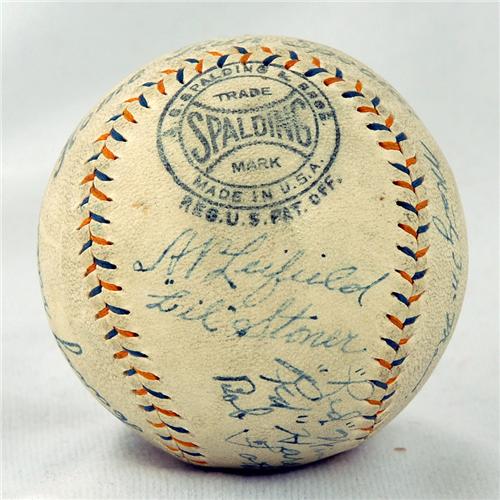 Here are some highlights from Lil's biography on SABR.org:

"On June 8, 1926, Lil became a part of baseball lore. Unfortunately, he shared the stage with Babe Ruth, who received top billing. Up to this point, Stoner had never surrendered a homer to the Sultan of Swat. That afternoon during the fifth inning at Navin Field, Stoner stood on the mound, with Lou Gehrig at second base. Lil stared at baseball's prolific home run hitter and pitched to him cautiously. The count was three balls with no strikes when Ruth found a pitch to his liking. There was no exact account of where the ball left the park, but judging from Harry Bullion's story in the Detroit Press it was somewhere in deep right center field. Ruth's home run received a two-sentence mention from Bullion. The writer did not seem enamored with the clout. In fact, he waited until the eighth paragraph before mentioning it. "For length, the first ride that Ruth gave the leather doubtless established a record for Navin Field or anywhere else." Later he would describe it detail, "the ball cleared the fence with plenty to spare, skimmed along the top of parked cars on Cherry Street, landing on the asphalt pavement and a boy in pursuit of the leather caught up with it at the corner of Brooklyn Avenue." The newspapers in New York City estimated a distance of 600 to 626 feet. They all agreed that it was Ruth's longest in the big leagues."

"Before the 1928 spring training camp for the Detroit Tigers, a picture and story appeared in newspapers across the nation. It showed Lil posed alongside an orange sponge cake. It was 3 tiers high, iced in white, ornamented with green icing, lavishly decorated with paper leaves and flowers. It had 45 candles. Stoner baked it especially for a friend who was celebrating his 45th birthday. Towards the end of Stoner's major league career, his cooking ability became well known. In fact, there were those who claimed that he might not be the best pitcher in the big leagues, but no one would argue his cooking ability! His eldest daughter, Jean, claimed that during the Depression, the Stoner family always had food on the table. She remarked that her father was a nutritionist before anyone knew what nutrition was."

Aside from cooking, Stoner became accomplished at growing irises. He was considered such an expert that he was asked to travel statewide to judge irises in flower shows. His proudest botanical accomplishment was his creation of a pink iris hybrid.
While most Texans tended to be Country and Western music fans, Lil's daughter Jean Harmon says that Lil was a devoted opera fan. His interest began while he was playing in Detroit. A teammate had tickets for the opera and gave them to Lil. Stoner attended and was forever hooked. According to Jean, her father had amassed quite a collection of opera records. Caruso was his favorite.

Ulysses Simpson Grant Stoner died in Enid, Oklahoma, on June 26, 1966, following a brief illness. He sat in his hospital bed, eating a meal, listening to a ballgame on the radio. At some point, he scratched his head and died. Lil was sixty-six years old. He is buried in Memorial Park Cemetery in Enid.
Lil Stoner had a career record of 50-58 with an ERA of 4.76 over nine major league seasons. He played with the Detroit Tigers and briefly with the Phillies and Pirates.
But when the "Bowie Baker" had all the ingredients, he produced a real delicacy!

Posted by Hackenbush at 9:46 AM