Football season has started (pre-season anyways) and none too soon for me since the Cubs are done. Special thanks to Alphonso Soriano .238, Milton Bradley .255, Geovany Soto .218, Mike Fontenot .226, Aaron Miles .177, and Carlos Marmol , Kevin Gregg, and Aaron Heliman 29 saves out of 45 opportunities, for helping to make this one hell of a frustrating season.

As I was saying, football season has started and I've dug into the vintage vault and pulled out a couple of iconic quarterbacks, Johnny Unitas and Broadway Joe Namath. 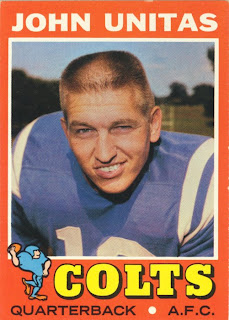 This is just classic Unitas, still sporting the flattop hair. We can't see but I'm sure he's wearing he black hightops too and the squinty stare is just perfect. His card says John but don't you always think of him as Johnny? 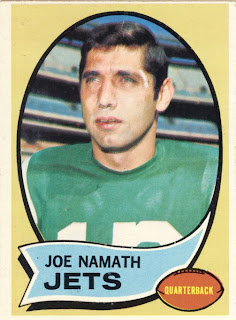 This is Joe's 1970 card, the year after the huge Superbowl win. Judging by the hair the picture is a couple of years old. Note the band-aid by his left eye. 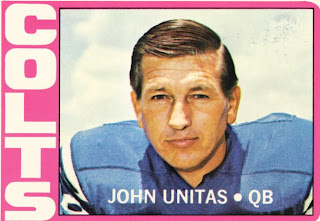 Here's Johnny, one year later cardwise (1972), but he almost looks like another guy. Is pink really a good color for a football card? 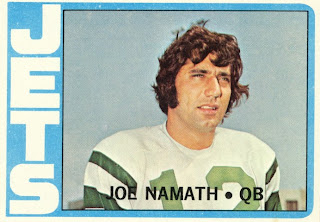 Same year, 1972. Now Joe looks like Broadway Joe. I didn't have the sideburns but my hair looked a little like that in 1972.
Posted by Hackenbush at 9:10 AM