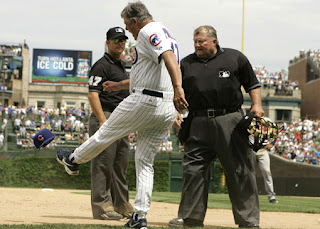 The Cubs have had at least their share of injuries this year. Lou almost became the second Cub to be injured leaping out of the dugout (it happened to pitcher, Ryan Dempster). Lou was so incensed the other day by a bad call at second that he sprinted onto the field. Lou oughtn't to sprint anywhere.
With this in mind here's what the skipper said yesterday:

"We talked about getting healthy, and it just doesn't seem like it's possible. I almost pulled a hamstring going out to second base yesterday . It's the darndest thing."
Posted by Hackenbush at 7:59 AM