I'll start off today by saying, IT'S HOT! I know, I know, it's the middle of August. Still, this is the first time this summer we've had back to back 90's in Chicago. And oy, it's so humid!


Which got me trying to think cool thoughts. Cool? Ice? HOCKEY!

The Blackhawks have had a renaissance the last couple of years making it all the way to the conference finals this year before losing to a better Redwings team. Rocky Wirtz and Jim McDonough have done an outstanding job bringing excitement back to the United Center. Within days of taking over the team after the death of his father (hated by most fans) Rocky made a deal to televise home games. He brought back to the fold all the players from the past who his father had alienated, Hull, Mikita, Tony 0.. There was the Winter Classic at Wrigley Field on New Years Day. This is not to say everything has gone smoothly. There are a lot of fans unhappy with the firing (reassigning) of head coach Dennis Savard and most recently the firing (reassigning) of GM Dale Tallon. Still, there is no denying the Blackhawks are back on the map.

Maybe because of this I picked up a pack of UD Hockey last fall. Christmas morning I found another in my Christmas stocking ( I love my wife). I was so impressed by them that I bought a complete base set on ebay. The cards have a nice glossy finish (one minute we love shiny, the next we want retro dull). The white of the ice or the boards makes a great background for the bright colors of the jerseys. Without even knowing the players I like the cards strictly from an aesthetic point of view. They're cool looking! 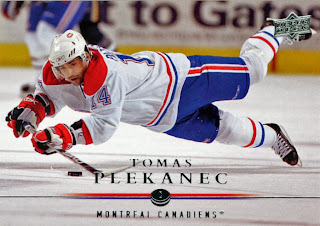 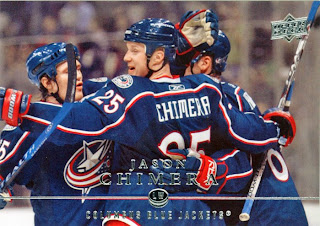 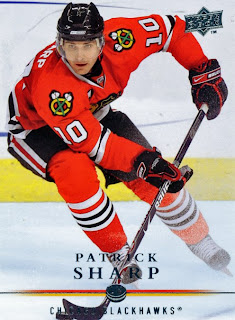 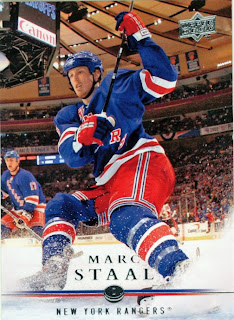 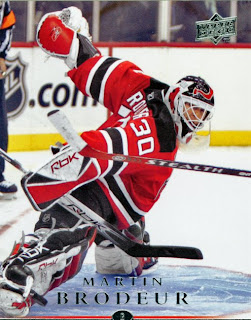 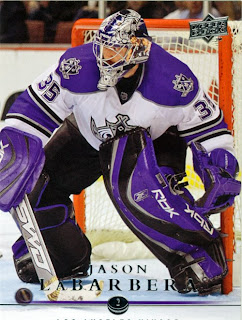 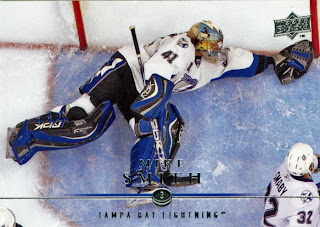 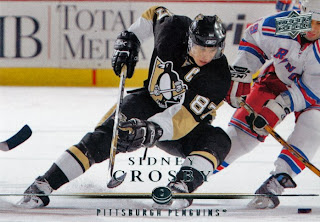 Posted by Hackenbush at 7:55 AM