In the Spring of 1995 my friend Beth invited me to visit her in Phoenix where she had moved the year before. Both of us being Cubs fans it was a natural to plan a day watching the Cubs during Spring Training in nearby Mesa. The summer before, the baseball season had ended on August 12 with a player walkout. There was no World Series in 1994 and the strike lingered through the winter. We bought our tickets early hoping things would be settled by March. They weren't. So on a sunny Spring day Beth and I went to HoHoKam Park and watched a bunch of nobodies play baseball. I do remember getting a nice burn on the back of my neck and this program: 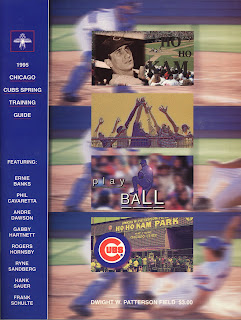 This was the "Cubs" roster on that day: 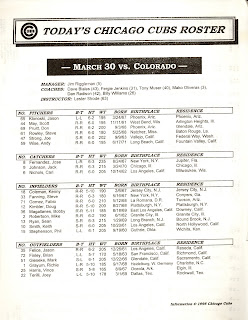 Jim Riggleman, currently the Washington Nationals skipper, was in his first year of managing the Cubs. Other than Jim and the coaches, Muser, Jenkins, Williams,Radison and Strode I can't say I recognize anyone on the roster. The 1995 regular season Cubs roster was not that much more impressive if you ask me though they did finish with a rare winning record of 73-71. The standouts were Mark Grace, Sammy Sosa and Shawn Dunston.

Included in the program was this look back at 1994: 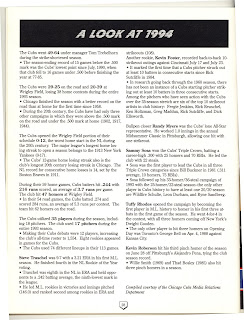 I'm a Cubs fan so I'll focus on the most negative thing, the 0-12 start at Wrigley, though there are a few fun bits of trivia there. 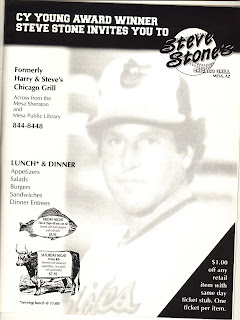 The picture here is hard to see but it's Steve Stone as an Oriole. I personally like Steve. I think he's one of the best color men in the game. It's a shame he's with the White Sox now. He may have made a good general manager, the position he aspired to a one time. I have sometimes wondered how his post baseball career would have differed had he not had that one magical year in Baltimore when he won the Cy Young award. We did not eat at his restaurant so I can't give you a review. Steve sold out and the place is now called Sluggo's Sports Grill.

There's one more thing of interest in the program and it's a small feature on Michael Jordan as a member of the Scottsdale Scorpions. 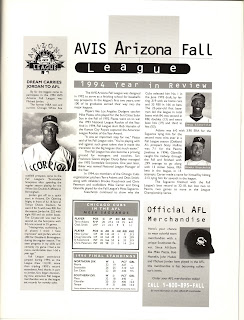 I know a lot of people have negative feelings about Michael's foray into baseball. As a tribute to his father I think it was touching. The fact that he took a spot away from the twentysomething'd player on a minor league team doesn't bother me. In the end he says playing with the minor leaguers reinvigorated him. It led to three more NBA championships and for that I'm grateful.
Posted by Hackenbush at 2:07 PM