I came across this video of Hoyt Wilhelm from 1958 the other day and thought I'd share:
At about the 3 minute mark we're introduced to Indians catcher JW Porter.  He seemed like an interesting fellow so I looked him up.
In fact, a SI.com article from 2006 named Porter#10 on a list of the 10 greatest characters in Detroit Tigers history (no surprise that Mark, "The Bird" Fydrich was #1).

"10. J.W. Porter (C, 1955-'57) The freckle-faced catcher enjoyed food, drink and female companionship, which might be one reason that the former bonus baby only hit .228 in six big-league seasons. His favorite dinner order was a light repast of "two dozen over light," and he'd eat all 24 eggs at once. One year he was given a subpoena to appear in court on a paternity charge. Not only was Porter unembarrassed, but he captured the moment through one of his other pastimes -- writing poetry. Who could pass up this gem: While the other players are down in the lobby/ Porter is in his room, practicing his hobby. Whether the hobby in question was poetry or romance has been lost to the mists of time."

J W Porter (and it was “J W,” not standing for anything) was born in Shawnee, Okla. in 1933, but as with so many thousands, his family soon migrated to California. In Oakland, Porter emerged as not just an outstanding baseball talent, but the most sensational teenaged player in the nation. With the Bill Erwin Post No. 337 American Legion team that won the national championship in both 1949 and 1950, coached by the amazing George Powles, Porter was the major star. (One of his teammates was Frank Robinson.)


Another record was set by J.W. Porter, Oakland catcher, when he captured the national batting championship for the second successive year. The 17-year-old receiver, who hit .551 in ten tourney games the previous year, produced a .488 average in 1950 national tourney play to retain the Hillerich & Bradsby trophy which is awarded annually to the leading batter … Porter, who received a bonus in excess of $50,000 for signing with the Chicago White Sox organization in December, 1950, was named the No. 1 American Legion Junior player of the year.

The precise bonus amount lavished upon Porter was $65,000, a staggering sum for the period, if not the largest yet expended, then close to it. The “Bonus Baby” rule had just been revoked (it would be reinstated in 1953), so the White Sox were able to farm out their prized prospect.

Despite his extreme youth, the Chicago organization assigned Porter to Class A (not what it is today; remember that at that time there were Classes B, C and D as well). As an 18-year-old in 1951, playing exclusively as a catcher, Porter was terrific, hitting .302 with 15 home runs and 95 RBI in 117 games. The following season, performing at both Class A and Double-A, through late July Porter was hitting .323 with 11 homers, this time both as a catcher and outfielder. Yet White Sox GM Frank Lane—who wasn’t called “Trader Lane” for nothing—surrendered the 19-year-old to the St. Louis Browns in a trade.

Bill Veeck’s Browns immediately promoted Porter to the majors. Over the remainder of the 1952 season, they didn’t play him every day, but he was in the starting lineup most of the time, and not as a catcher but rather—curiously, to be sure, but these were Veeck’s Browns—as a center fielder. The raw rookie wasn’t yet ready to master major league pitching, but neither was he overmatched by it: he made consistent contact and hit .250, though without power. Just two years removed from American Legion ball, Porter was holding his own in the big leagues, and stardom appeared inevitable.

But then again these were Bill Veeck’s Browns, and in his brief and frantic ownership of that distressed franchise Veeck matched Frank Lane trade for trade, and then some. In December 1952 Veeck dealt Porter to the Detroit Tigers.

Yet before he could report to his third organization, Porter was drafted into military service, where he would spend the next two years. Discharged in time for the 1955 season, the now 22-year-old Porter made Detroit’s big league roster to start the year. But, oddly, the Tigers deployed their exceptional prospect in a limited utility role, playing him in just 18 games (10 starts) through the end of May before farming him out. In Double-A and Triple-A until September, Porter again did well, hitting .270 with 13 homers in 99 games, playing first base as well as the outfield and catcher.

In 1956 Porter was promoted back to the majors, and now things got truly weird: Though he was on the active roster all season long, Porter was given just 14 game appearances, and only three of them starts, by manager Bucky Harris. The following season, under new manager Jack Tighe, the 24-year-old Porter wasn’t simply left to vegetate on the bench, but still he was used in a strict backup corner outfielder-catcher-first baseman role, getting just 58 games and 156 plate appearances.

And so it would be for the next two years. Porter was acquired by Cleveland, thenWashington, and then St. Louis, and each organization deployed Porter as the merest scrubeenie. He got no serious chance to show what he might do in sustained regular play, either as a catcher, outfielder or first baseman. In his few-and-far between times at bat, Porter didn’t hit well, but neither did he embarrass himself; it was a situation that fairly cried out to just give this kid 500 trips to the plate some year—heck, 300 or 400, whatever, something more than benchwarmer status. What were they waiting for?

But by 1960 Porter was back in the minor leagues, where he would put together four straight solid years at the Triple-A level, as a catcher-first baseman hitting for a nice average with consistent power. He never received another call-up. Perhaps most puzzling of all, none of the four expansion teams that came into existence in the early 1960s took a flyer on him. Porter would finally quit playing following the 1966 season, and then work as a minor league manager for a couple of years.

Why it was that such a clearly talented prospect was tossed around from ball club to ball club like a hot potato, and never allowed a meaningful opportunity to succeed or fail as a big league regular, I don’t know.

As if all of this weren’t bizarre enough, in the 1958 Sporting News Baseball Register Porter listed his hobby as “poetry.” I’ve undertaken extensive research into the hobbies listed by ballplayers in the Registers of the 1940s/’50s, and Porter is the one and only guy who stood up and announced that his hobby was poetry.

Here's a photo of of the now 81 year old JW from just a few days ago: 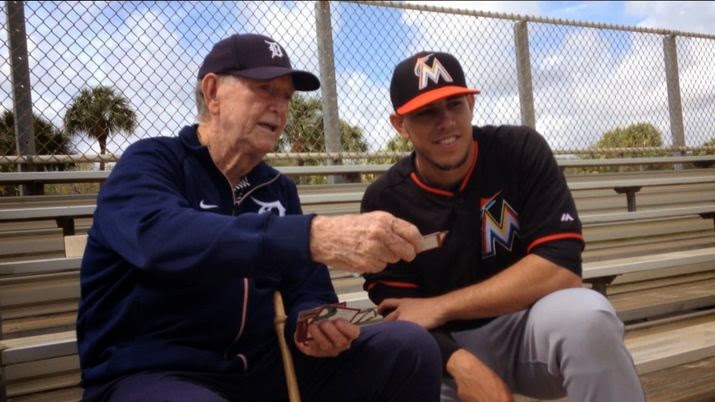 Posted by Hackenbush at 2:30 PM