Blow Out the Candles April 11 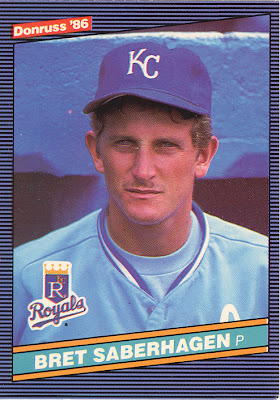 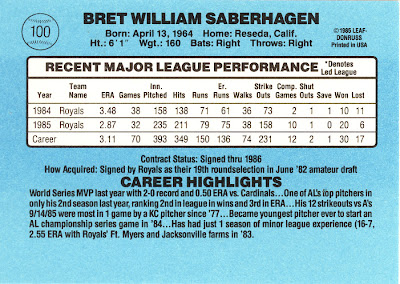 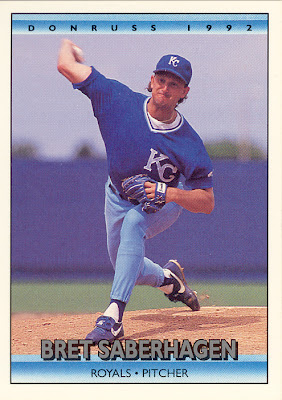 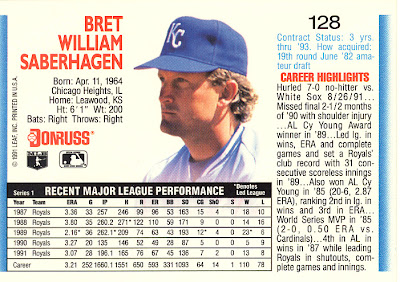 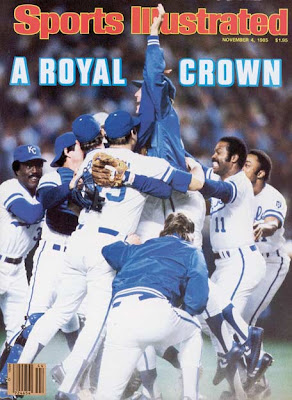 Bret pitched two complete games in the 1985 World Series win over the Cardinals including a shutout in Game 7. 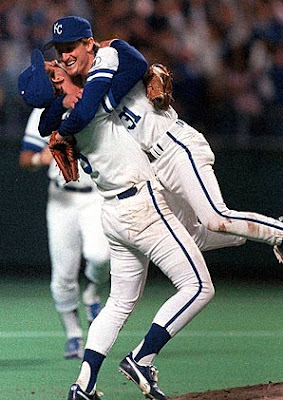 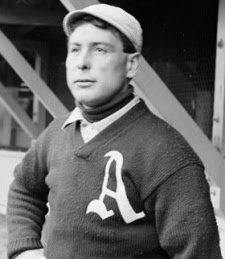 Ossie Schreckengost gained fame, if not notoriety, as Rube Waddell's catcher and as his road room-mate. In a day when road travel often required not only rooming together but actually sharing beds, Ossie Schreckengost insisted that a provision be included in Waddell's contract prohibiting him from eating Animal Crackers in bed. Schreckengost died at the age of 39 from uremia, which is the toxic reaction following renal failure.
---Baseball-Reference.com
From The Baseball Biography Project:
Osee Schrecongost
by Dan O'Brien 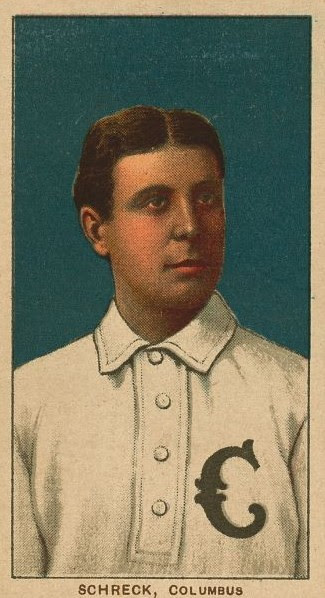 Inexorably linked to pitcher Rube Waddell, Osee Schrecongost left his own mark as one of the Deadball Era's prominent catchers. Schreck--as his name was often truncated--hit .271 in 11 major league seasons. He also established himself as one of the best defensive catchers in the game. "Schreck could do more with his glove than any catcher that ever stood behind the plate," said Connie Mack, his manager at Philadelphia and a former big league catcher himself. "He caught 99.99 per cent of balls thrown to him with one hand, his glove hand. He used his glove hand like a shortstop." Schreck held the major league catcher's record for single season putouts for nearly 50 years. His 29 innings behind the plate on July 4, 1905 is still the top one-day workload for a major league catcher.

Osee Freeman Schrecongost was born on April 11, 1875, the second son of Naaman and Sarah Crotzman Schrecongost in the western Pennsylvania mining town of New Bethlehem. The family name was of German origin, and over the years a number of variations of Osee's name--first and last--have appeared. Osee's given name has been rendered as Ossie, Ossee, Osie, and Osee, but family descendants confirm his name was Osee (pronounced Oh-See), and that was how he signed his marriage license. Whatever he was called, Osee first received attention as a ballplayer while catching "Johnson, the crack colored pitcher" for the New Bethlehem baseball team. "Johnson and Schrecongost constituted the battery for the home team and received a hearty applause from the spectators," the New Bethlehem Vindicatorreported in 1894. "Schrecongost caught every man but one who attempted to steal second."

The young catcher advanced through the minor league ranks over the next few years with stops at Williamsport (PA), Fall River (MA), Augusta (ME), Cedar Rapids (IA) and Youngstown (OH). He made his major league debut for the National League's Louisville Colonels at Baltimore on September 8, 1897. Ironically, the pitcher was another western
Pennsylvanian who was also making his big league debut--Rube Waddell.

Osee opened the 1898 season with Cedar Rapids of the Western Association. When that league folded near mid-season, Schreck hooked on with Youngstown in the Inter-State League. It was probably during this period that he met June Reed of Newcastle, Pennsylvania. A pretty spitfire of a girl, who also enjoyed cards, whiskey and cigars, "Jenny June" (as the family called her) became Mrs. Osee Schrecongost in the winter of 1899. The union produced a daughter a few years later.

Schreck got a return call from the majors at the tail end of the 1898 season. He caught nine games for the National League Cleveland Spiders, batting .314 with three triples and 10 RBI in only 35 at-bats. The following year, he shuttled back and forth between Cleveland and St. Louis, both owned by the Robison brothers. Overall for the season, Schrecongost hit .290 in 115 games, playing mostly catcher (64 games) and first base (43 games).

Schreck returned to the minors in 1900 but it was only a half-step back. The newly-christened American League, a descendant of the Western League, was one year away from claiming major league status. Schreck hit .282 in 125 games for Buffalo's AL club, logging 95 games behind the plate. When the American League challenged the National for major league recognition in 1901, Buffalo lost its franchise. Schreck signed with the new AL club in Boston. There he split catching duties with the oft-injured Lou Criger and batted .304 for the year.

Criger, a weaker hitter but the more consistent backstop, was the catcher of choice for manager Jimmy Collins and star pitcher Cy Young. Schreck became the odd man out, and joined the Cleveland Blues for the 1902 season. He wasn't even considered for catching duty with the Blues as Harry Bemis and Bob Wood were entrenched at the position. Instead, Schreck started the first 18 games of the season at first base. He hit well enough (.338) but never learned to play first base with great proficiency. The Blues released him in May.

After his release by Cleveland the Philadelphia Athletics signed Schreck. A's manager Connie Mack, a shrewd judge of talent, saw Schreck as a capable backup to catcher Mike Powers. Schreck caught his first game for Philadelphia on May 28 and began to see more regular action behind the plate by mid-June. Osee enjoyed his best season at the plate, hitting .327 with career highs in RBI and slugging percentage. His throwing also received praise, with Francis Richter ofSporting Life declaring, "Schrecongost's throwing is about as quick and accurate as that of any catcher now working in either League." But his most significant contribution to Philadelphia's pennant-winning season may have been his handling of southpaw Rube Waddell--not always an easy task.

"Often when Schreck would sign for a curve ball to be pitched, Waddell would not see the sign properly, and throw a fast ball," A's first baseman Harry Davis remembered, "but Schreck would catch it just as easily. There are very few catchers today who can catch one ball if they are crossed in this manner, particularly with the gloved hand alone, as Schreck invariably did." With Schrecongost catching most of his games, Waddell flourished in Philadelphia, winning 24 games and posting a 2.05 ERA as the Athletics captured the American League pennant.

In 1903, Schreck's batting average dipped to .255, before plummeting to a career-low .186 in 1904. A free swinger who liked to "hit it off his ear," Schreck seldom walked. In 1905 he drew only three free passes in 429 plate appearances. That year his batting average rebounded to .271, and Schrecongost caught a career-high 114 games as the Athletics once again won the American League pennant. Osee also set the single-season record for putouts by a catcher (790), a record which was not surpassed until Roy Campanella recorded 807 putouts in 1953. On July 4, 1905 in Boston, Schreck set a major league record by catching 29 innings in a single day. Waddell and Cy Young each went the distance in the second game of a doubleheader, a 20-inning marathon won by the A's.

When the 1906 season opened the A's had high hopes of a repeat championship. Instead, they struggled to a fourth place finish, 12 games behind the White Sox. Schreck and Waddell became easy targets for criticism. Like his battery mate, Schreck loved to have a good time and became known for his heavy drinking, a habit which began to wear on his teammates. Despite batting a solid .284, "Philadelphia's oldest players are blaming Waddell and his catcher for its loss of the pennant," the Detroit News quoted an anonymous Philadelphia insider.

After the disappointing season Schreck agreed to clean up his act. "Schreck is too valuable a man to throw himself away on drink and he has realized that fact," Harry Davis told The Sporting News. "Schreck has given up drinking, and I believe for good. He has given his promise to his wife, to Connie, and to me and to his friends not to touch the stuff again." Osee reportedly weaned himself off the hard stuff with sherry-enhanced milkshakes. As Osee cleaned up his act, his relationship with Waddell reportedly deteriorated. Despite any personal difficulties, Schreck remained Waddell's usual battery partner. He caught 99 games for Philadelphia in 1907, including 29 of Waddell's 33 starts.

Waddell became increasingly unreliable during the A's tight 1907 pennant battle with Detroit. The Tigers won the flag and Mack sold Waddell to St. Louis before the 1908 season. Schreck still led the team in games caught but his batting average tumbled to .220, a 52-point drop-off from the previous year. With the A's floundering in sixth place, Mack sold Osee to the White Sox in late September. Schreck caught his last major league game on October 2, 1908, as Cleveland's Addie Joss pitched a perfect game and delivered a 1-0 victory over 40-game winner Ed Walsh. Ironically, Schrecongost had also been the losing catcher in the first perfect game in American League history, when Boston's Cy Young defeated Rube Waddell and the Athletics on May 5, 1904.

Following the end of his major league career, Schreck caught for Columbus and Louisville in the American Association. He plunged further into the minor league ranks late in the 1910 season when he signed with the Marion Diggers of the Ohio State League. When a job managing the Diggers failed to materialize the following year, Schrecongost's professional baseball career came to an end.

His health began to fail just about the same time Waddell's was in rapid decline. Regardless of their later squabbles, a lasting bond must have existed between them. When Osee learned of Rube's death on April 1, 1914, he reportedly told friends, "The 'Rube' is gone and I am all in. I might as well join him."

Just a few months later, Schreck collapsed in a Philadelphia café. He died on July 9, 1914, from complications due to uremia. He was buried in Kittanning Cemetery in Kittanning, Pennsylvania, located 20 miles southwest from where he had been born just 39 years before.