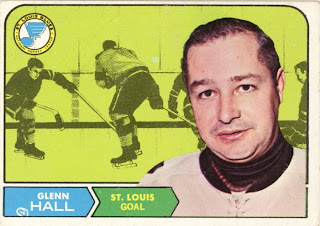 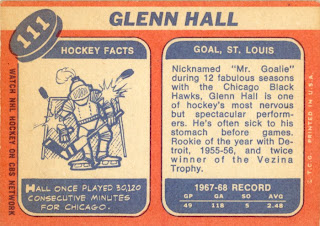 First is Glenn Hall who turns 78 today. Known as "Mr. Goalie" he led the Chicago Blackhawks to their last Stanley Cup Championship wayyyyyy back in 1961.
From Wikipedia:

Hall ended his brilliant career with 407 Wins, 84 Shutouts, a career GAA of 2.49, and voted to 11 All-Star Games. Hall is widely regarded as one of the first NHL goalies to master the butterfly style of goaltending. He is thought of by many as one of the best goalies to ever play the game. Hall still holds the record for the most First Team All-Star selections (7) which he did while playing the same era as other greats, Sawchuk and Plante (as well as other Hall of Famers, like Johnny Bower, Gump Worsley, and Roger Crozier). 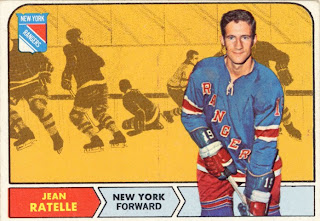 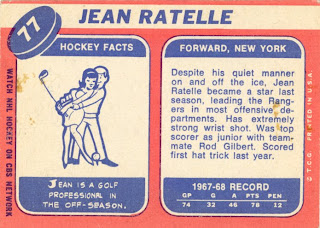 From Wikipedia:
A product of the New York Rangers organization, a term utilized in the days prior to the NHL's Entry Draft, Ratelle's hockey career almost ended when he suffered a serious back injury at age 23 and had to undergo major spinal cord surgery. He recovered to become a regular with the Rangers from 1963 until 1975 -- his greatest success coming with his linemates Vic Hadfield and Rod Gilbert in the so-called "GAG line" (which stood for Goal A Game) -- and was the perennial scoring leader for the Rangers between 1968 and 1973 when the team was a powerhouse annually among the league's best.

Ratelle was poised to beat out Boston Bruins' legend Phil Esposito for the scoring title in 1972 before he lost fifteen games due to an injury, but came back for the Stanley Cup finals against Boston to lead his team. Only Esposito, Bobby Orr and John Bucyk had before then had scored as many points in league history as Ratelle had managed in his shortened season. His 109 points that season remained a Rangers' scoring record until 2006, when Jaromir Jagr broke the mark.

In November 1975, Ratelle was traded with teammates Brad Park and Joe Zanussi in a blockbuster deal to the Boston Bruins (ironically, for Esposito, and for Carol Vadnais). Ratelle finished strongly that year for his second 100-point campaign. On March 21, 1976, he played his 1,000th game against the Montreal Canadiens. He starred for several more seasons for Boston, gaining admiration for his slick passing, skill at faceoffs and all-around excellent play, retiring a Bruin after the 1981 season. He served for several years thereafter as an assistant coach for the Bruins.

Remembered as a gentlemanly player (perennially in the running for the Lady Byng sportsmanship award), Ratelle played centre ice in the NHL for twenty-one seasons, accumulating 1267 points on 491 goals and 776 assists. At the time of his retirement, he was the league's sixth all-time leading scorer. While he never played on a team that won the Stanley Cup, Ratelle was a member of the 1972 Team Canada squad that defeated the Soviet Union in the first-ever Summit Series.

In 1985, Jean Ratelle was elected to the Hockey Hall of Fame, along with Bernie Parent and Bert Olmstead.

Celebrating birthdays today are also Chubby Checker who turns 68 and Lindsay Buckingham who is 60 today.

Posted by Hackenbush at 3:20 PM