Even though I'm old enough,  I'll admit Leonard Cohen hasn't really been on my music radar screen.  I remember seeing the sheet music for Suzanne in a book of songs of the 1960's.  Later I did have a CD of Cohen songs, Famous Blue Raincoat,  by his former backup singer Jennifer Warnes (most famous for her movie soundtrack duets with Joe Cocker and Bill Medley).  A couple of years ago I became more interested after reading, I'm Your Man: The Life of Leonard Cohen by Sylvie Simmons.  I was somewhat suprised to find that there had been a Leonard Cohen "card" produced.  It's really a postage card sized sticker but it was sold in packs.  If you guessed it's a Panini product you're right.  It's from a 100 card set issued in Germany in 1975.  The checklist is pretty amazing, from The Beatles and Elvis to to Frank Zappa, Abba, The Jackson Five and Melanie etc, etc.  It's an eclectic mix and includes a bunch of acts I've never heard of.  Randy Pie anyone?

I guess Mr Cohen, and yes he fits nicely into my Jews on Cards collection, isn't particularly sought after (or I got really lucky) as I picked him up on Ebay for 25 cents.  Try to find another, though. 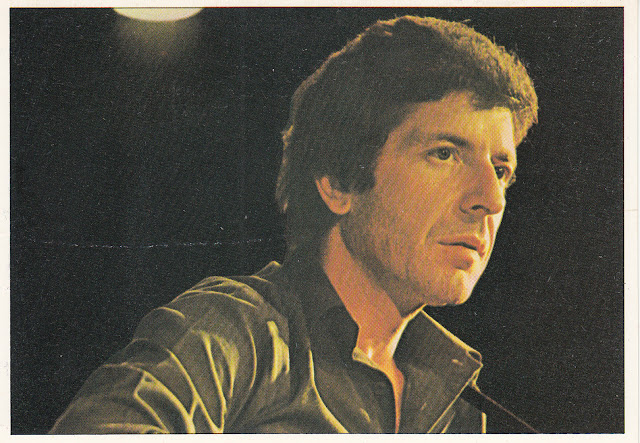 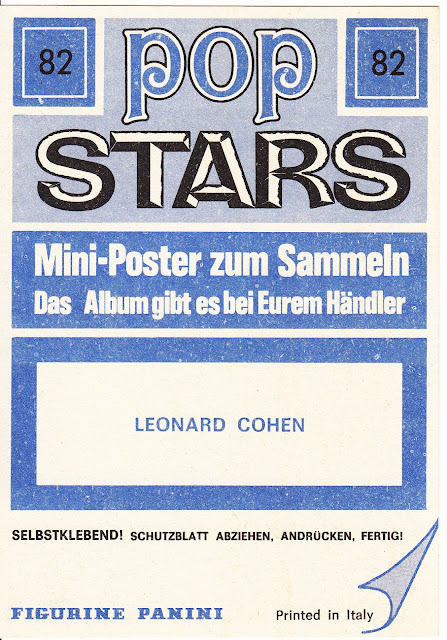 These days Leonard Cohen is best known for his enigmatic and arguably over covered song, Hallelujah.  Here's what he said about it in 2012:

This world is full of conflicts and full of things that cannot be reconciled," Cohen has said, "but there are moments when we can transcend the dualistic system and reconcile and embrace the whole mess, and that's what I mean by 'Hallelujah.' That regardless of what the impossibility of the situation is, there is a moment when you open your mouth and you throw open your arms and you embrace the thing and you just say, 'Hallelujah! Blessed is the name.'…

"The only moment that you can live here comfortably in these absolutely irreconcilable conflicts is in this moment when you embrace it all and you say, 'Look, I don't understand a fucking thing at all – Hallelujah!' That's the only moment that we live here fully as human beings."


This is the most popular version to date: