Don't Get Smart With Me

I was basically a little kid when Get Smart was on in the mid to late 1960's, but I do remember it.  Here's what co-creator, Mel Brooks said about the show,
"I was sick of looking at all those nice sensible situation comedies. They were such distortions of life. If a maid ever took over my house like Hazel, I'd set her hair on fire. I wanted to do a crazy, unreal comic-strip kind of thing about something besides a family. No one had ever done a show about an idiot before. I decided to be the first."

I picked up this one card to add to my 1960's non-sports sets sampler.  In case you're not as old as I am, it features Don Adams as Maxwell Smart and Barbara Feldon as Agent 99. 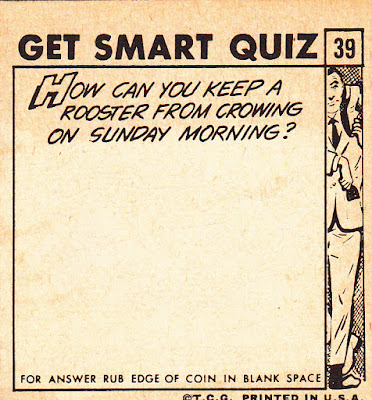 The answer is:  Kill him on Saturday.

The classic opening sequence
Posted by Hackenbush at 5:30 PM