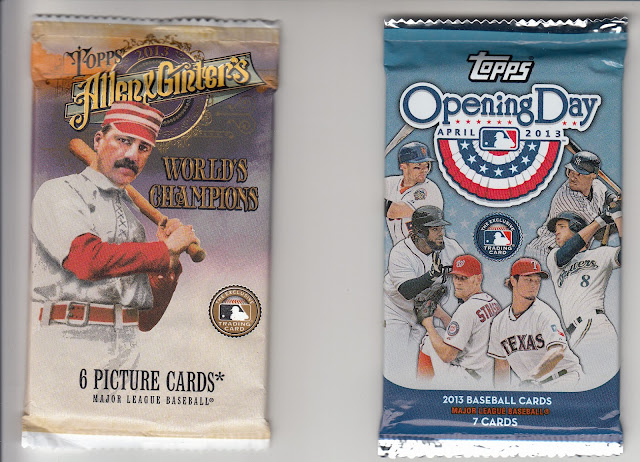 It's kind of nice that the Opening day pack features a bunch of stars from the time but I love the artwork on the Ginter pack.  I'm going to start by giving 1 unofficial point to A&G.

The match-ups are the exact order the cards came out of their respective packs.  If you (I) were taking this seriously it would probably make more sense to rank the cards from each pack.  This seems like more fun to me.

This first pair looks like a tough one.  Too much white space on this card but I like the banana sign in the background.  Votto is a five time all-star and a one time MVP. 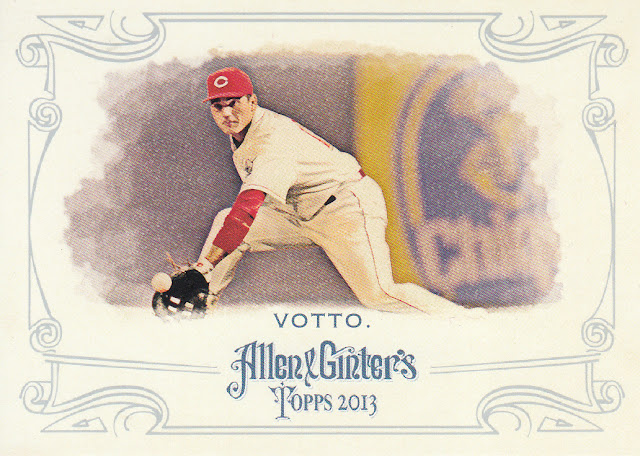 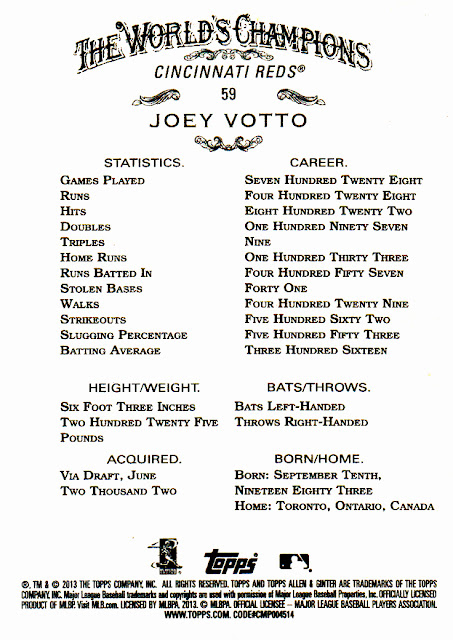 As far as the photo goes this one is pretty good for a pitcher but is it photoshopped?  Dickey was fresh off his Cy Young year with the Mets.  I really like the blurb on the back of the card.  I think the "career chase" thing is stupid.  Is anyone really chasing Cy Young's career wins record?  They might as well have said Dickey was 755 home runs behind Hank Aaron. 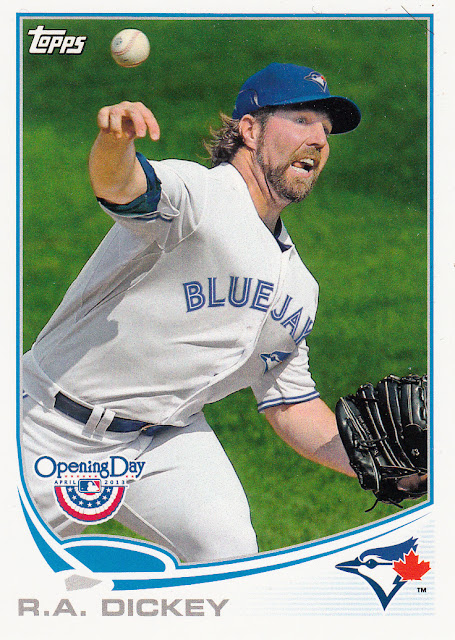 I'm not a White Sox fan but over the years I've come to admire Frank Thomas.  The Big Hurt was a first ballot Hall of Famer. 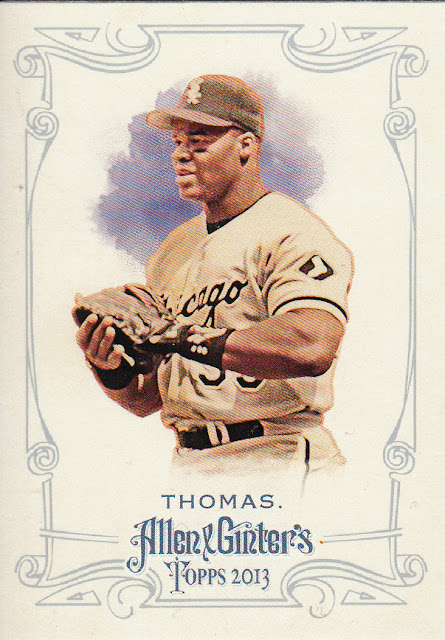 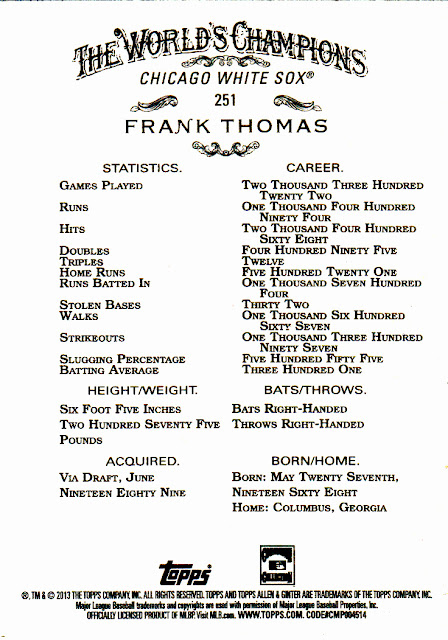 Oh, Ryan Braun.  Big Frank put up big numbers while never being accused of using PED's.   We all know what happened with this guy.  2013 was the year he got suspended for 65 games. 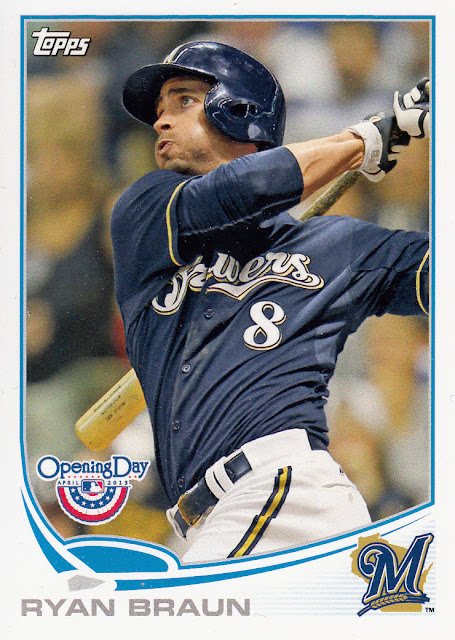 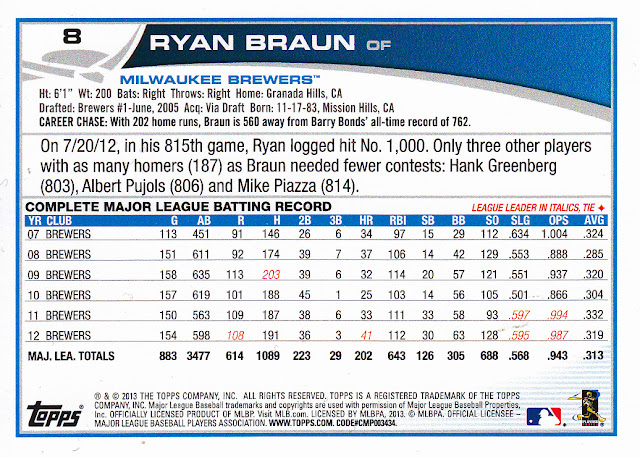 This is a slam dunk for Allen and Ginter's which goes up 2 zip.

It's generally accepted the Fonzie didn't live up to his big contract with the Cubs.  On the other hand he was a good teammate and I did grow to like him before he left for the Yankees.  His offensive stats put him in the Hall of Very Good. 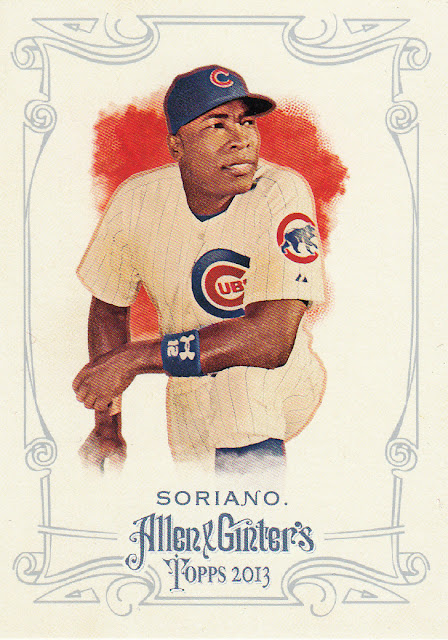 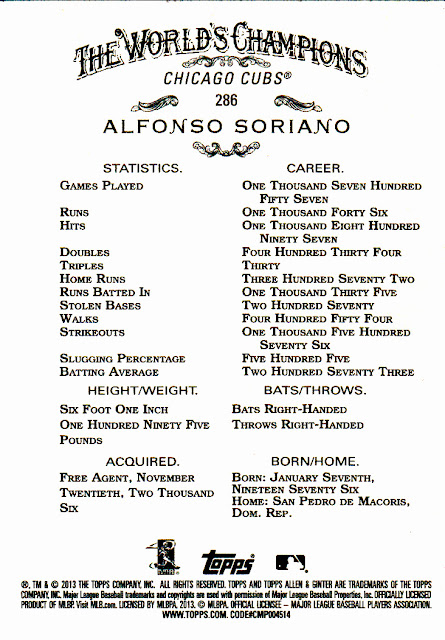 This photo looks like a possible home run.  Adrian hit three for the Dodgers in 2012.  Only one was at home,  in the first inning on August 25 against the Marlins.  I may be totally wrong.  Gonzalez is a free agent as of today. 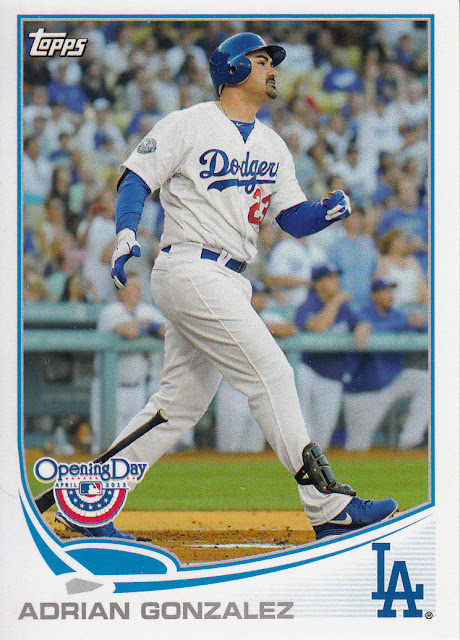 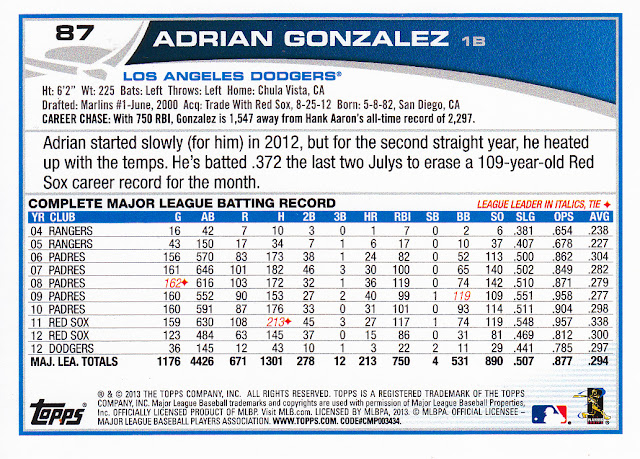 Another pretty easy win here for A & G.  So much for my prediction, huh?  Ginter's is pitching a shutout and look who's coming up to bat.

Mr. Cub.  This is an image of coach Banks from Spring Training 1972,   I've always liked the legends cards in Allen and Ginter's. 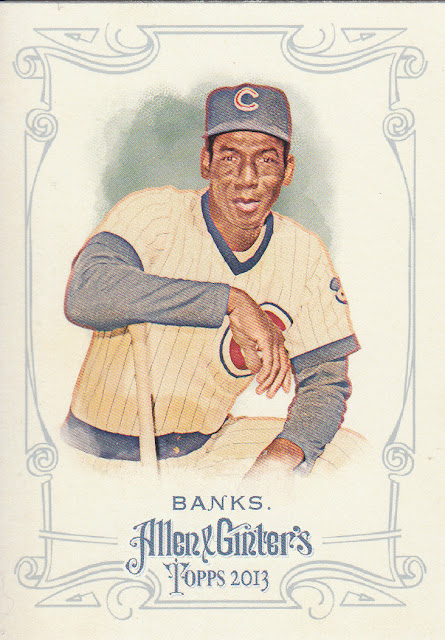 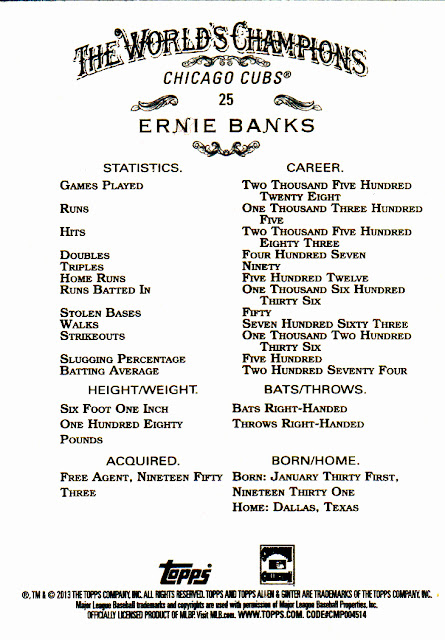 Wow, it's arguably the current face of baseball, Mike Trout.  As noted on the reverse Trout was coming off his ROY season. 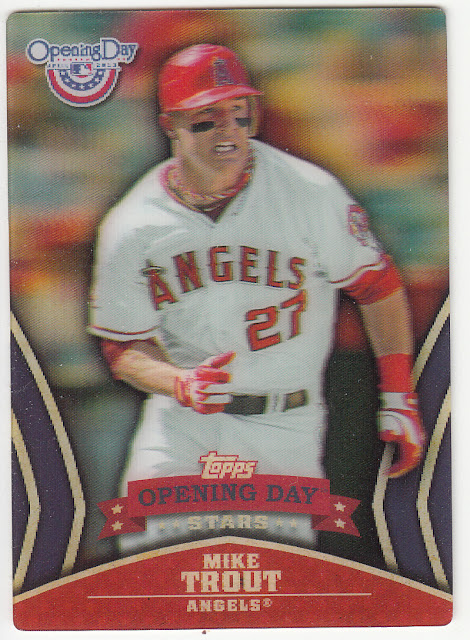 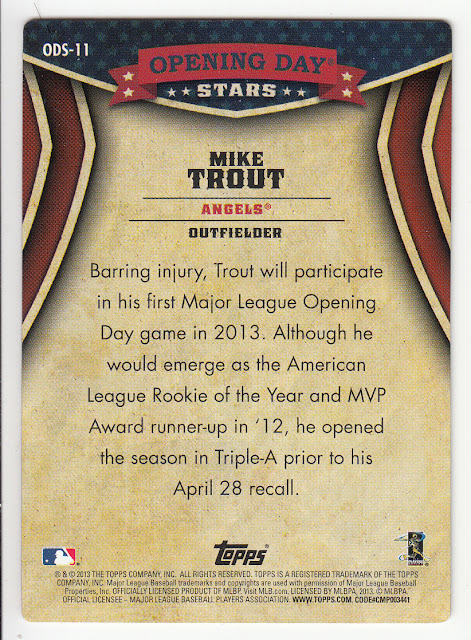 I'm a Cubs fan but I'm also a fan of the game.  I can't ignore that this is a Mike Trout insert and a 3-D one to boot.  Opening Day staves off elimination.  The score is A&G 3- Opening Day 1.

First off, this next card is a mini.  It's sort of strange that I love old tobacco cards but not modern cards of the same size.  We'll, maybe not really.  It's not the diminutive size of tobacco cards I like but their quality, selection and age.  There are bigger tobacco cards, such as these and I like them.  In a pack of six cards I just feel cheated by a shrunken card, especially when there's a full size version in the same set.

I am a fan of women on cards and Bonnie Bernstein seems to be very well respected.  For some reason I just can't place her. 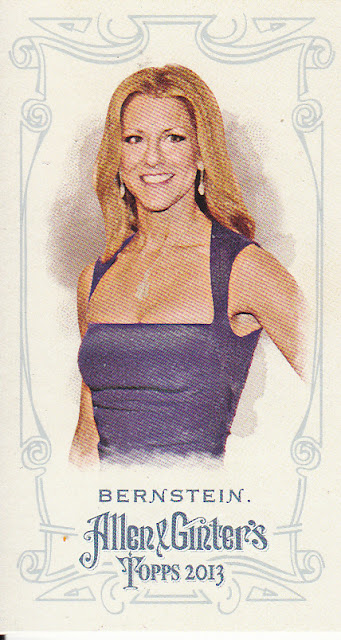 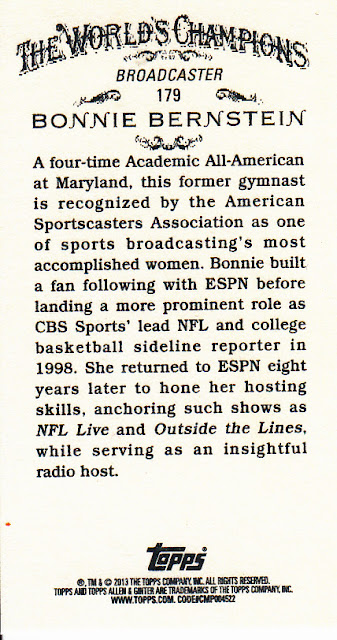 Goldschmidt is one of, if not the, premier first baseman in baseball.  2013, while not an outlier, was a monster year for Paul.  Here's another photo that could be a home run (or a foul ball). 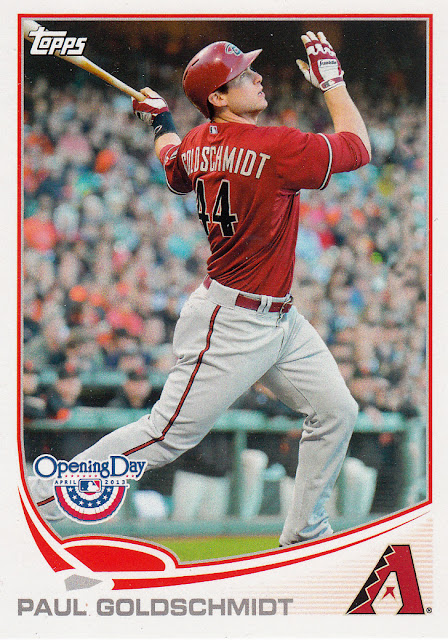 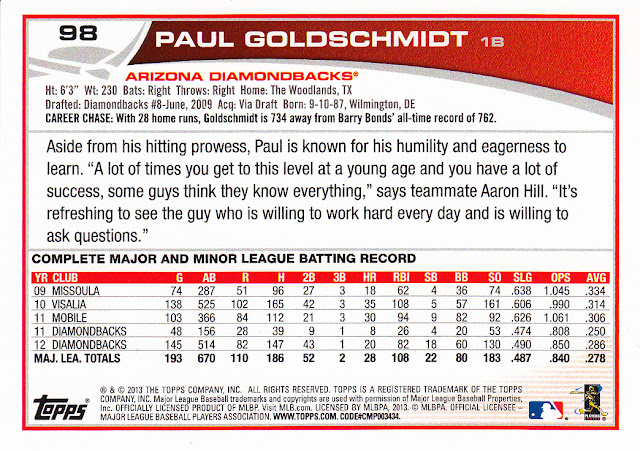 I'm going for the Goldy on this one.  Opening Day is making a comeback.  Down 3-2.

This is a nice looking card and an interesting concept by Allen and Ginter's.  Granderson is an Illinois/Chicago guy (like me) but he's played for a long time in New York. 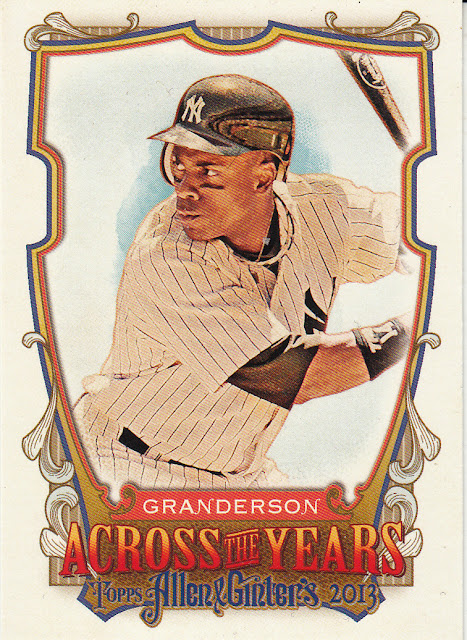 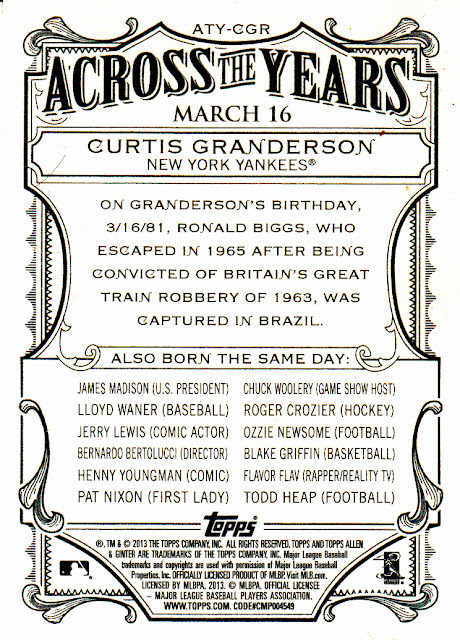 There is an extra card here.  We'll see how this plays out.
Santana just had a really nice year for the Twins but overall he's a middle of the road pitcher. 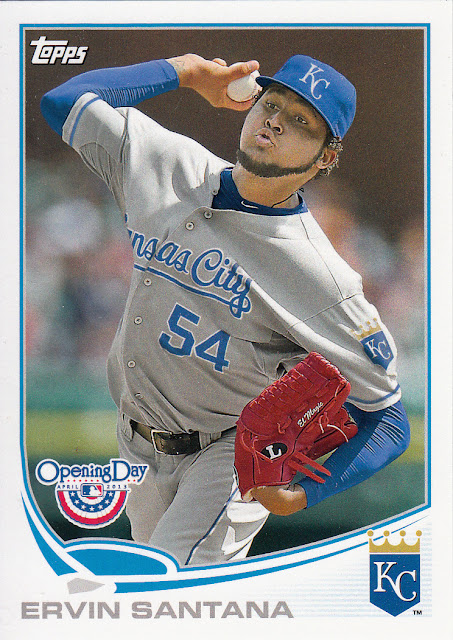 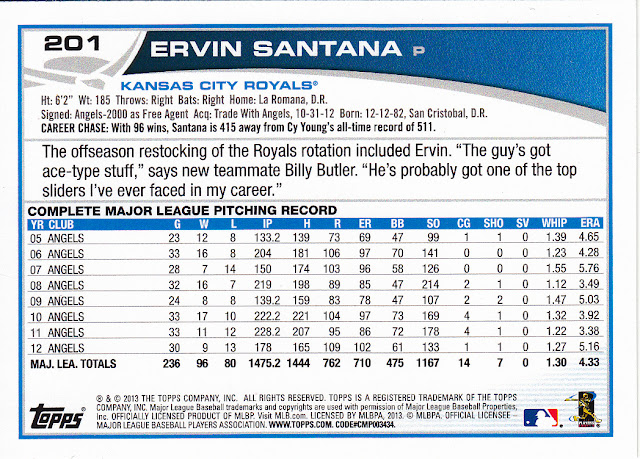 An intriguing if a bit static play at the plate photo here.  Also an intriguing career cut short by injuries. 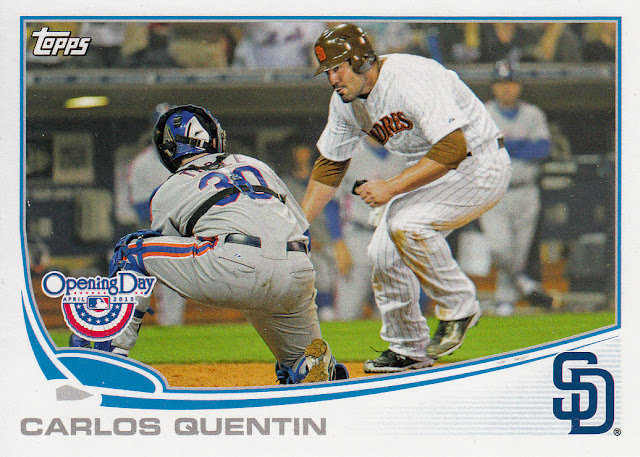 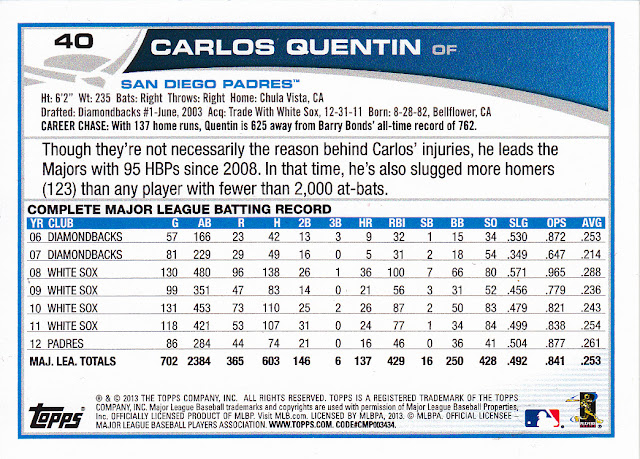 Opening Day had two shots at the A&G insert but I'm not impressed by either.  Allen and Ginter's holds off the late charge and wins 4-2.

Honestly, I'm a bit surprised.  I usually have poor luck with premium brands (for me A&G is a premium brand), and good luck with Opening Day.  This proves that anything can happen with a small sample size.  The Trout 3-D is excellent but two Cubbies alone makes the Allen and Ginter's a good pack let alone the Bernstein mini (my rant aside, she's a woman and of Jewish heritage).  The other three cards in the pack were no slouches either.

Pack wars are fun to do.  They're time consuming but they inspire me to look closely at my cards and I always learn something.

Posted by Hackenbush at 5:15 PM