It's always good when you can combine two things you love. 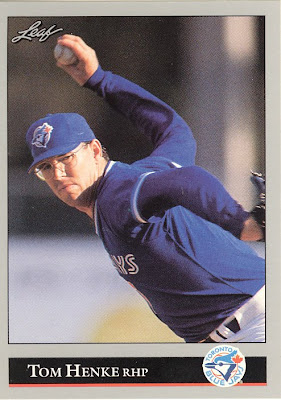 1992 Leaf #159
Tom Henke had a pretty good career.  He is currently 17th on the all-time saves list, was a 2 time All-Star and saved two games in the 1992 World Series which the Blue Jays won.  But that's not why he's here.  He's here because he reminded me of an episode of Seinfeld called The Apology, in which actor James Spader plays recovering alcoholic, Jason Hanky, who George refers to as "Skanky Hanky".  Here's some excepts:
Posted by Hackenbush at 6:40 PM