Sooz over at A Cardboard Problem has a post tonight about Mark Prior's current comeback attempt.  Her question was, "What do you think is his best rookie card?".  I don't know if this is the "best" rookie card (hell I'm not even sure if it is officially a rookie card).  I love the fact that he has a big smile on his face.  Most of his cards are more like the picture on the back.  As a Cubs fan I lived through the whole saga of his arrival and eventual departure (not to mention, although I just have,  the 2003 playoffs).  I wish him the best.  Hopefully he'll be smiling like this again in a major league uniform. 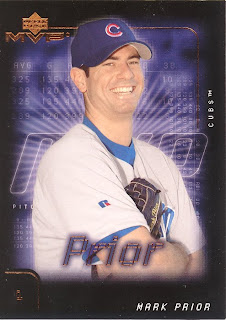 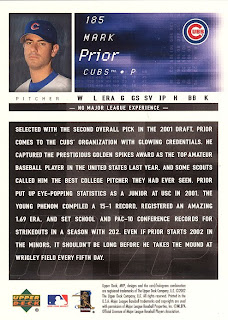 Posted by Hackenbush at 8:47 PM

Labels: A Cardboard Problem, Mark Prior