Check Out My COMC Cards #1

I just received my first batch of cards from Check Out My Cards. I don't know if this is a record or not but I made my first buy back in December of last year. Has anyone else waited that long to have their cards shipped? Well, since this is my first experience with COMC I thought I'd do a series of posts sharing the results.

Just because he's having such a crummy summer I'm going to start with this card: 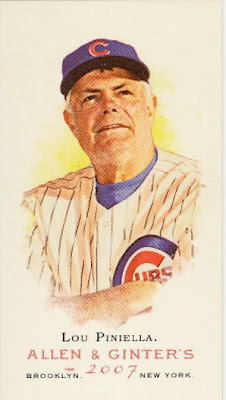 I feel bad for Lou. He went into this season with high hopes. He got rid of his clubhouse cancer, Milton Bradley, and had what looked like a pretty good team. Unfortunately the club started out with major middle relief problems and slumps for it's two best hitters. The relief has improved but the hitting has not. Recently, Steve Stone got on his case about not playing Tyler Colvin enough and now he's had a relapse of the clubhouse cancer in the name of Carlos Zambrano. Just not a good year for Sweet Lou. I'm still predicting he doesn't make it to the end of the season with bench coach Alan Trammel taking the reigns for the rest of the year.
Posted by Hackenbush at 3:23 PM