There are a lot of people in this world that do not like pigeons.  My wife an I are not among them.  At our last apartment in Chicago we felt lucky to witness a nice pigeon couple build a nest on our third floor window ledge, lay eggs, have a baby and ultimately teach it to fly.  Our landlord, seeing the nest, told us to please get rid of it.  Um, no.
Yesterday my wife came across this story on the internet: 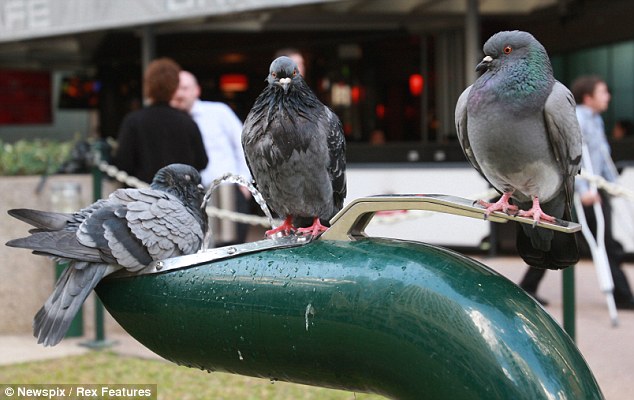 They obviously have a better class of pigeon Down Under.
Instead of pecking around on the filthy pavements among cigarette butts and chewing gum, they prefer to sip filtered water and go to great lengths for a bath.
The trio pictured here, in Brisbane, Queensland, appear to have worked out a clever system of adapting the water fountain built by humans for their own pigeon purposes.
After waiting for the fountain to be free, one bird jumped on the lever and pushed it down to fill up the bowl, while another kept watch and the third splashed in.
When it had drunk its fill and cleaned its feathers, the third pigeon hopped up to the handle and let his friends have a go.
The three birds continued their bathing ritual for ten minutes, entertaining passers-by in Post Office Square, in Brisbane's bustling business district.
Unlike other birds, who take a sip of water and throw back their heads to swallow, pigeons suck up water using their beaks like straws.
Though they aren't very popular in this part of the world and are referred to as rats of the sky,
Pigeons - even the English ones - are considered among the most intelligent of all the bird species.
http://www.dailymail.co.uk/news/article-1206608/Birds-feather-drink-The-pigeons-help-sup-water-fountain.html#ixzz2ULJebZfP Follow us: @MailOnline on Twitter | DailyMail on Facebook

Posted by Hackenbush at 4:40 PM